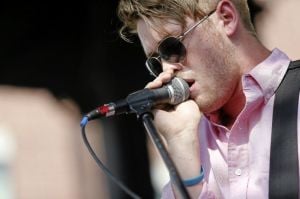 If the members of Capitol Cars were nervous, you couldn’t really tell.

It was by far the biggest stage yet for Capitol Cars, which won the opening band contest to play at The Hop Jam on Sunday. The group only formed in January after playing separately and in other bands for years.

Kicking off the festival Sunday, they played a soulful indie-rock style and they played it loud and very well.

The group impressively mixed several styles and genres, making the indie rock more dynamic. It was all impressive, even if you didn’t know the band was so young.

Frontman Grant Wiscaver had a distinct voice with a great range and control. It was especially on display for “Downtown,” one of the all-original set they played for about 30 minutes to open the show. In each song, Wiscaver sounded like his voice was made for the sound the band made.

Aaron Watson was impressive on guitar, playing nearly effortless solos with a soaring and powerful sound. The blues and soul influence was evident in drummer Jordan Phillips’ work. Bassist Nick Vinyard, the elder of the band at 23, was a good backbone for the band and its sound.

It had a sound reminiscent of Kings of Leon, especially with Wiscaver’s voice.

The band played for just about 25 minutes, the shortest set of the evening. I wanted to hear more, but from the reaction of the crowd and the band’s performance, they should be around for a while.

The Tulsa World with Hanson hosted the opening band contest, with nearly 100 videos loaded into the contest. Hanson picked the top five, who were then voted on by fans.

The contest was close throughout, with Capitol Cars winning by just more than 30 votes.

They won the opening spot in the contest and a download of their music will be available on bottles of the Hanson Brothers Beer Company Mmmhops Pale Ale, now available across the country.