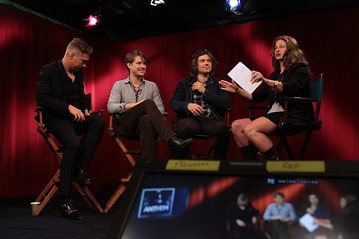 They own their own record label, produce seasonal chocolates and coffee for fans and have just paired with an Oklahoma-based brewer to create MMMHops, a pale ale named after their biggest hit, “MMMBop.”

Three brothers who arrived on the music scene as teens writing, singing and producing their own records, the band Hanson has just released their sixth studio album, “Anthem.” They rose to fame in the late 1990s with their hit album “Middle of Nowhere,” and have survived the last two decades by making sure to involve themselves in other projects (food, beverage and merchandise) at an ownership level.

Isaac, Taylor and Zac came to the WSJ offices in New York to perform a few songs from their new album and speak with reporter Alexandra Cheney.

Watch an interview with the band and a performance of “Cut Right Through Me.” Leave your thoughts in the comments.