Hanson bring 25th anniversary tour to NZ: ‘You’ve got to bake a cake and put some candles in it’ 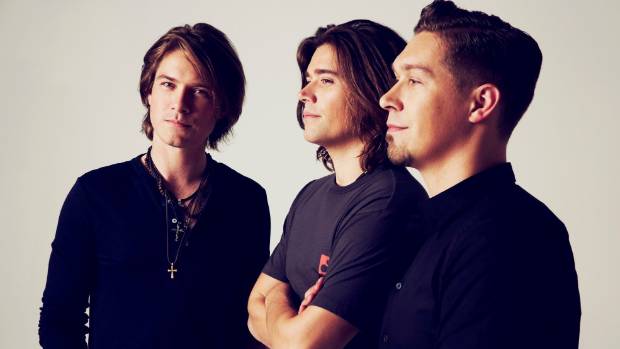 The year was 1997. The song: MmmBop. If you had ears at the time, you’ll remember the chorus: that string of what seemed like nonsense words, that jaunty syncopation.

It hit number one in 27 countries. In New Zealand, it spent two weeks at the top of the charts. Depending on your age, you might have stayed up past your bedtime, like me, to record it onto cassette tape off the Top Nine at Nine.

Hanson – those three blonde brothers from Tulsa, Oklahoma – were marketed straight into the hands, and hearts, of teen and pre-teen girls. And by God, it worked.

In the rural Manawatu, we cut posters of the trio out of TV Hits magazine. We wrote their names, and ours, into our exercise books, then counted up the shared Ls and Os to determine the likelihood of us falling in love.

Online, you can still find cached copies of Hanson fan sites listing each brother’s favourite colour and ice cream flavour. One tells me that Taylor, the middle child, has a scar on his head from running into a glass door as a kid. On another, I learn that Zac, the youngest, “carries a pack of gum EVERYWHERE he goes”.

It’s been two decades since the single, and its accompanying album, Middle of Nowhere, was released. The brothers are all grown up, now. They have wives and kids, their own brew (Mmmhops, a smooth-bodied pale ale), their own craft beer and music festival (Hop Jam, held annually in downtown Tulsa). They’ve released five studio albums since their 1997 debut.

In the past, they’ve shied away from talking about their pop past, those bucket hats and baby teeth, in favour of pushing their more aggressive, guitar-based new releases. This time around, they’ve built a world tour on the back of that nostalgia.

The brothers will play Auckland on June 27, one of the first stops in a journey celebrating 20 years since Middle of Nowhere, and 25 years of Hanson as a band.

“When you hit a landmark like that,” Isaac, the oldest brother, says down the phone from their home town, “it kind of makes sense to make sure to properly celebrate it. You’ve got to bake a cake and put some candles in it, and sing a few songs and tell a few stories.”

The show, Isaac says, will see their debut album “fully represented”, but “we’ll also be making sure to hit high points of all the records over the past 20 years”.

It will be loud, he promises. It will be raucous. Those who have never seen Hanson play before will feel “very comfortable with music that you recognise and know”. In addition to that, “we also want to introduce you to stuff that a lot of other fans know and that we’re really, really proud of”.

Isaac, for those who are wondering, exudes the exact level of middle-American openness that you’d expect from a home schooled kid, raised by evangelical Christians, and none of the Bieber-esque qualities you’d anticipate from a man who hit the big time at the age of 16.

Much ink has been spilled on the Hanson brothers’ youth, but it bears repeating: they were just six, nine and 11 when they formed the band, in 1992. Zac holds the record for the youngest Grammy-nominated songwriter (for MmmBop, natch), of all time.

They started off singing a cappella on street corners, doing covers of 1950s bangers like Splish Splash and Rockin’ Robin. The next thing you know, they’re being signed at SXSW, recording a Christmas album (Snowed In), and fending off marriage proposals.

It would be enough to send any child star into a spiral à la Macauley Culkin. Isaac shrugs off any suggestion of being ‘balanced’, but credits his and his brothers’ level-headedness to their upbringing.

“Our parents were really, really grounded people, but also really ambitious people, meaning they saw our ambition and were willing to help us chase it,” he says.

“They weren’t pushing anything on us but they were more than willing to facilitate it, especially my mom. The truth is, she is probably the primary reason why we started doing things so young, because when we told her a crazy idea, she didn’t think it was crazy.

“My parents were never condescending to us. They treated us like adults from a very young age.”

It’s stood them in good stead – through their three-year struggle for creative freedom from their former label, Island Def Jam, the subsequent formation of their own independent label, 3CG, and a six-month band breakup in 2012.

The latter came, Isaac says, while writing their latest studio album, Anthem. He describes it as a “really big speed bump”. The brothers split in February of that year, and didn’t start writing together again until September.

This is Hanson we’re talking about, so if you’re looking for guile and gossip, a Noel and Liam Gallagher-style he-said she-said, you’re not going to get it. Instead, Isaac says, diplomatically, that “anything worth doing is going to be hard”.

The Middle of Everywhere tour runs until October. A second Christmas album is in the works, and a greatest hits compilation is also due out by the end of the year. The brothers might be a quarter-century older, but they’re not slowing down.

And the fans? It turns out they’re not all ’90s tragics, like me, who got hooked on MmmBop and never went away. Hanson shows are always, to be fair, packed with women in their 20s and 30s, but there’s a “fair smattering” of younger ones, too.

“I am continually pleasantly surprised by how many people are showing up at shows and are younger than our first record,” Isaac says.