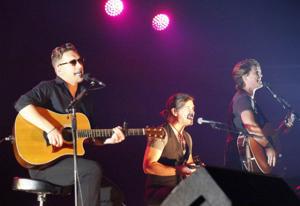 The Tulsa-based pop group of brothers was added late in the week after schedule opener Foy Vance was taken off the schedule. The show was sold out.

It is the first of two shows in Tulsa in almost a week for Hanson, who is set to close out the Hop Jam Beer and Music Festival on May 17. Hanson organized the festival, now in its second year in the Brady Arts District. The Hop Jam is free to attend.

Sheeran made the announcement that Hanson would open his show at the BOK Center via Twitter Friday afternoon.

Sheeran’s album “x” was one of the biggest selling albums of 2014 and was named by the streaming music service Spotify as the most streamed album of the year with more than 430 million plays.

Aside from Hop Jam, Hanson is also preparing to welcome thousands of fans from around the world for the annual Hanson Day weekend, open to members of the Hanson fan club. The event, which kicks off later next week, features exclusive performances, discussions with the band and access events, held around Tulsa. The Hop Jam festival will cap the weekend, though it’s open to everyone beyond fan club members.