Never too late to relive your childhood boy band crush 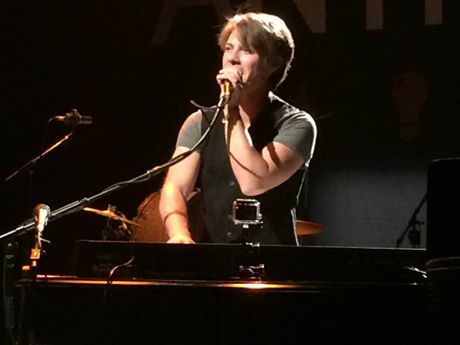 I am screaming my nine-year-old lungs out while listening to the infamous Hanson song Mmmbop on a friend’s discman (no iPods in those days, kids).

I came home that day and asked my mum whether she thought Taylor or Zac Hanson would marry me (Isaac was a little bit too old for me at the time).

Like any other legendary mum of the Hanson era, she swiftly bought me their debut album, Middle of Nowhere which played in our household until it was scratched beyond repair.

I suspect she did this as some sort of consolation, knowing I’d probably never lay eyes on the trio, let alone marry one of them.

But 17 years later, that all changed.

That same awesome mum bought me two tickets to see the boys – now men – live at the Tivoli in Brisbane on Tuesday night – the first leg of their Anthem Tour in Australia.

And man, did I feel nine years old all over again.

While my dutiful brother wasn’t overly pleased at being one of few blokes at the gig, I did catch him mmmbop-ing away halfway through the song.

Growing up I’ve had many a conversation with people a bit older than me who say things like, “do you remember the song such and such used to sing”.

And when I returned a blank look, they’d immediately follow up with eye rolling, an exaggerated sigh, and “oh, they were before your time”.

When I was telling – or maybe boasting to – a colleague to tell her daughter that I was going to see my childhood crushes, my colleague gave me that same blank look and said that, being 17 herself, she would have no idea who Hanson were.

It was at that moment it dawned on me that her daughter wasn’t even alive when I was at the height of my epic, one-sided love affair with the American lads.

Hanson are to me what David Cassidy was to my mum, and probably what One Direction will be to teenage girls today, eventually.

We all have our childhood crushes but I think only the very lucky get to see them – even if it happens to be 17 years later.

I have only just recently returned from the three-day Splendour in the Grass festival at Byron Bay and I honestly have to say, the Hanson gig just about knocked it off its perch.

Big call, I know. But they played a great mix of their old songs – including my beloved Mmmbop – as well as less-known tracks off their later albums and the whole crowd was just buzzing the entire performance.

And I need to get this off my chest – I swear Taylor Hanson and I had a “moment” on Tuesday night.

Albeit it was very quick and was one he actually probably had with a girl behind me.

But I’m pretty tall so I’m going to claim it.