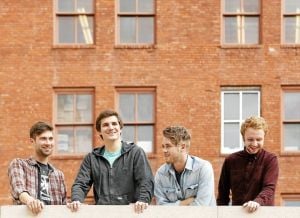 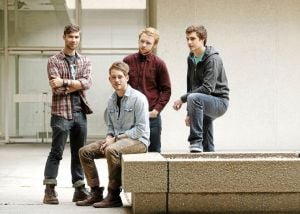 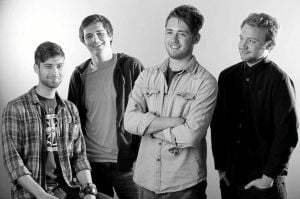 Nick Vinyard sent out a short text message to his bandmates Monday morning.

The next thing Capitol Cars bandmate Jordan Phillips did after getting that text was blast “MMMBop” on his car stereo.

After a week of voting, urging their friends and family to vote, papering Tulsa with fliers and asking strangers sitting in front of laptops if they could go and listen and vote, Capitol Cars won the opening spot of the inaugural Hop Jam beer and music festival, hosted by Hanson.

The opening band contest was sponsored by the Tulsa World Weekend magazine and Hanson.

Now Capitol Cars will perform first at the festival, set to begin at 5 p.m. Sunday in the Brady Arts District. The stage will be at the corner of Main and Archer streets.

Talking to the Tulsa World on Tuesday, the band was still in a bit of shock. That’s not surprising considering the four — Vinyard on bass, Phillips on drums, Aaron Watson on guitar and Grant Wiscaver on guitar and vocals — played their first gig together a few months ago.

“We’ve played four months and this happened? That tells me keep going,” Wiscaver said. “This could be good.”

They all have been playing on their own and in little duos for years. Vinyard, 23, has played with Watson, 22, for about nine years. Both are recent college graduates. Wiscaver, 18, and Phillips, 19, have played together for several years, as well.

Where Capitol Cars came together is a unique connection between the bandmates.

“This kid started coming around my house all the time,” Watson said. “I heard his stuff and he heard my stuff, and we both liked the same kind of music. There’s a lot of transferable interests.”

It took about eight months of knowing each other before Watson and Wiscaver put their heads together and played together.

“Grant’s really good at creating raw ideas and can just generate stuff really quickly and it’s really good quality,” Watson said. “The thing I like most to do is shape dynamics and production stuff. I think there was a really natural way to write right there.”

They hammered out five songs in that first jam session. They were ideas that Wiscaver had had but wasn’t able to really put to paper until the session with Watson, he said.

Then, when they got together with Phillips and Vinyard, the music was natural.

“I feel like we’ve been playing so long (individually), we feel like we know our roles and know how to make each other stand out in the band,” Vinyard said.

With Hop Jam, the band now feels like they really have something. They see a goal now.

“We’re gaining a lot of momentum,” Watson said. “We want to keep rolling with it and make as much as we can out of it. I’ve set out the next year of my life for Capitol Cars.”

Phillips agreed, though he said he always sees music as part of his life.

“I don’t have anything planned other than music,” Phillips said.

“I don’t think I ever did. If it’s this or a sound engineer somewhere. I think this is the only thing I’ve ever truly wanted to do.”