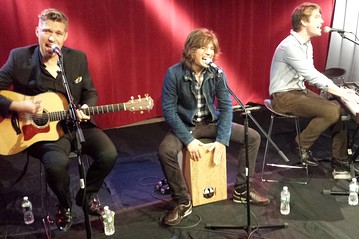 Hanson, the trio of brothers known for their catchy songs like “MMMBOP” and “Get the Girl Back,” have released their sixth studio album, titled “Anthem.” Back in the late 1990s, the band helped make the world safe for harmony-laden commercial pop-rock with their hit album “Middle of Nowhere,” and continue to be supported by devoted fans on social media. The Oklahoma born and raised singer/songwriters stopped by the Wall Street Journal offices to perform a few songs and speak with reporter Alexandra Cheney.

Watch Isaac, Taylor, and Zac Hanson at work singing “Get the Girl Back” in this video.