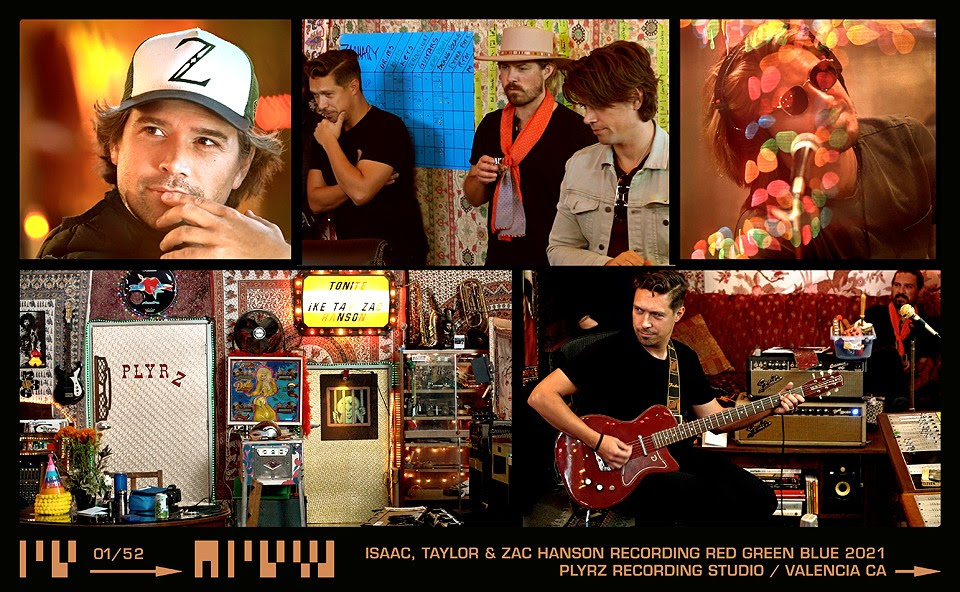 WEEKLY PIC
This week we are proud to release the new album Red Green Blue worldwide. We can’t wait to share this new album and celebrate 30 years of music throughout 2022!

MESSAGE FROM THE BAND
It has been a crazy full week, but that is to be expected with it being Red Green Blue release week!

More than ever these past few days we have been talking about the world tour and the newly released RGB album, and it has been so cool to see people respond to it. Red Green Blue is a project that highlights what makes HANSON, not just what HANSON is. At the very core of the RGB album is the desire to never stop growing, and it is a project that challenged each of us to find a new voice and maybe most of all to trust in each other. Now that it is out, it is for you to decide if we succeeded of failed.

There are still a few rooms left for Back To The Island 2023. January probably seems like a long way away, but it will be here in an… MMMBop. We are headed back the Jewel resort and are bringing our buddy Zach Myers and his band Alan Mack Myers and Moore. This will be our 10th year of BTTI and we are so grateful you have all continued to share this awesome island adventure with us.

We can’t wait to see you all on tour or on the Island!

TOUR TICKETS ON SALE NOW
Beginning in June in Europe, the RED GREEN BLUE WORLD TOUR will bring HANSON to the US and Canada from July-September, Latin America in September and Australia & New Zealand in November. The band’s first major tour since their String Theory album & tour in 2018/2019, fans will be in store for a tour which not only features the premiere of 15 songs from the new project but will also be the first tour to include live performances of 2020’s Against The World as well as career spanning set lists of fan favorites.

BACK TO THE ISLAND 2023
Member exclusive: The Back To The Island destination concert event is a rare musical escape that takes music fans to a world-class resort destination on the Caribbean shore, to enjoy connecting with other music fans in a beautiful place, while sharing once in a lifetime musical experiences with HANSON as your host.

Come take part in the 10th annual BTTI and escape to the tropics to kick off 2023 together on the beaches of the Caribbean. We can’t wait to return and we hope you’ll join us when we head Back To The Island!

NEW ALBUM OUT NOW
HANSON have finally released their highly anticipated new album, RED GREEN BLUE. The album comprises three solo-led projects from Taylor, Isaac, and Zac Hanson, and marks the band’s milestone 30th anniversary by bringing together the band’s three unique creative voices like never before, with a third of the album written and produced by each brother: Taylor’s RED, Isaac’s GREEN, and Zac’s BLUE. RED GREEN BLUE is available now on vinyl, CD, and digital at all retailers.