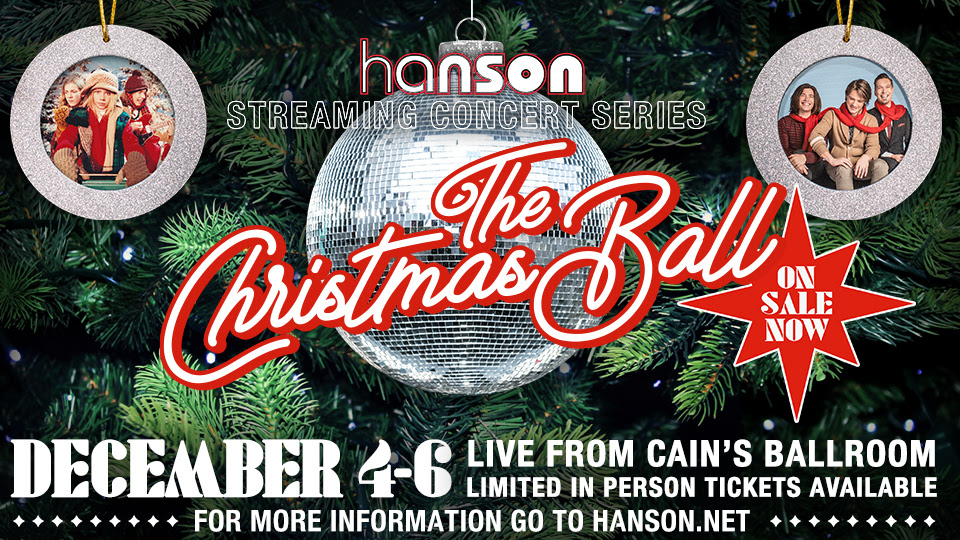 (Tulsa OK, November 9, 2020) – For the third consecutive month, pop-rock trio HANSON continue their live streaming series from Cain’s Ballroom. Consistent with previous months, each series features a musical theme, and fitting to the seasonal time of year, December’s events are centered around the holidays. Fans can enjoy a selection of Christmas songs ranging across the band’s 20 years of Christmas music. The Christmas Ball will feature holiday classics and more, from Christmas albums Snowed In and Finally It’s Christmas, making the series a must -see for any HANSON fan. As well as offering tickets to view the livestreams online, broadcasting live from the historic Cain’s Ballroom, a local music landmark in the band’s hometown of Tulsa, OK, allows the band to offer a very limited number of socially distanced in-person tickets to members of the band’s Hanson.net fan club.

“Of all the years to look forward to a great festive celebration, 2020 is primed. We are really excited to bring together a celebratory gathering featuring Christmas classics from our two holiday albums,” said Taylor Hanson.

“’This series of streams has been a great way for us to stay connected with our community around the world, even amidst the pandemic, and we can’t wait to have a big Christmas Ball with our guests both there in person and online,” said Isaac Hanson.

The Christmas Ball concert will give fans a chance to hear Christmas classics along with special live performances of fan favorites from the band’s catalog. Following months of ongoing restrictions on public gatherings that have put many local venues at risk, HANSON chose to partner with Cain’s Ballroom to host the streams. “The livestreaming shows have given us a great opportunity to share the live music experience with fans far and wide, while bringing attention to the importance of supporting local music venues like Cain’s. During a year of virtually no live concerts, every ticket helps to ensure great venues are able to keep their doors open,” shares Taylor Hanson.

HANSON are multi-Grammy nominees, releasing six studio albums and selling more than 16 million albums over their 28-year career. The band’s most recent album found them playing alongside symphony orchestras in some of the world’s premiere concert halls. The Streaming Concert Series from Cain’s Ballroom will be followed by the release of their 7th studio album and 2021 world tour.