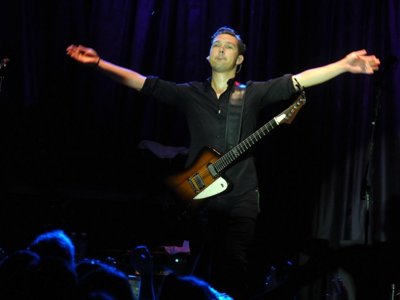 If TMZ news updates and VH1 “Behind The Music” episodes have taught me anything, it’s that the story of Hanson – of three Teen Beat approved young brothers becoming one-hit wonders in the late ’90s – should’ve ended miserably.

There should’ve been juicy tabloid drama. There should’ve been very public in-fighting between the clan and embarrassing headlines. There should’ve been desperate attempts at recapturing past fame – maybe with music, but most likely with the help of some sad reality show. The uninitiated might assume seeing a Hanson show in 2017 would feature exclusively ironic enjoyment, some sad headshakes about the days that used to be and a lot of people just impatiently waiting to hear “MMMBop” one more time.

Yet Hanson’s story, unlike other child stars and pop idols, hasn’t ended miserably. In fact, judging by their fresh and energetic Summerfest headliner set Thursday night in front of a filled and enthusiastic crowd at the U.S. Cellular Connection Stage, the brothers’ story hasn’t ended – period. And after celebrating 25 years intact this year, it’s nowhere near to coming to a close anytime soon.

For those wondering how we got here, after the days of “MMMBop” and teen idol-dom in the late ’90s, Hanson’s follow-up album, “This Time Around,” underperformed – partly thanks to an untimely label merger, partly thanks to a shift in the band’s musical style and partly thanks to a music industry and audience that chews up and spits out young performers with reckless appetite. However, after that financial misfire and more troubles with its studio, the boys went and created their own – 3CG Records – finding a rarity in these kinds of teen star stories: normalcy and stability, away from the prying of studio heads and eager tabloid spotlights.

With creative control now theirs, the brothers kept producing records over the years – they’re now up to six, with 2013’s “Anthem” the most recent – while also building a genuinely passionate fan base, one that certainly showed up Thursday night. Perhaps most importantly, though, in 2013, Hanson created a beer called Mmmhops, a treat for both the beer lovers and pun lovers in the crowd – and I am both.

Thursday night, however, was about the music, and Hanson truly impressed, delivering a relentless 90-minute set (complete with three-song encore) of roots-inspired pop rock, opening up on the sparse, unflashy stage with “I’ve Got Soul” off “Anthem.” The trio – Isaac on guitar, Taylor on lead vocals and piano and Zac on the drums – may hail from the ’90s, but their live sound often harkens back even further into music history, headed more into classic Americana rock sounds featuring sturdy arrangements and tight vocal harmonies. And that retro feel came well before they started busting out the literal oldies in a brief medley tribute to Steve Winwood, The Spencer Davis Group and The Doobie Brothers.

From “I’ve Got Soul,” Hanson moved on to “A Minute Without Out” and “Already Home,” including a nice conversational note (one of enjoyably many scattered throughout the night) that this gig was the band’s first in the U.S.A. after just wrapping up an overseas tour. All the while, the animated and energetic crowd knew almost every lyric and went wild for each new song’s opening riff. They went nuts when drummer Zac moved up to the piano and lead mic for “Juliet” midway through the set, and they dutifully followed the arm movements on songs like “This Time Around” and clapping encouragement from the guys. These weren’t people waiting for just the hit; these were dedicated and devoted fans (or “Fansons” as they are technically called; no, I didn’t make that pun up).

The brothers easily matched the crowd’s energy. While the stage was nothing to write about – literally, there’s nothing to write; it was just the regular curtains and standard lighting – Hanson filled the stage and the entire area with enthusiasm, whether it was the brief conversational intros for several of the songs, getting the crowd into it with assorted claps and hand waves, or merely the smile constantly creeping onto Taylor’s face behind the piano. They seemed like a band with, indeed, 25 years of performing prowess under their belts.

It certainly helped that Hanson burned through songs like a wildfire, running through its mighty setlist of some of the band’s catchy popular tunes (but not THE catchy popular tune quite yet) with a really solid audio mix, bringing out the full-bodied vocal harmonies and the small differences between tracks, from the keyboard organ on “Waiting For This” to Isaac’s guitar solos on “Where’s the Love” and the funky riff on “Look at You.” There’s not much that’s “hip” or “edgy” to the band’s music; it is an unapologetically old school classic rock sound made safe, smooth and, in the end, satisfying – like sonic comfort food.

The closest thing to a misstep during the entire, constantly forward-moving set was perhaps “I Was Born,” a newer song that’s a bit on the corny, preachily inspirational side as far as the lyrics go, but rocks nevertheless. Plus, Taylor did his damnedest to get the crowd into the newer track, explaining the “follow your dreams” nature of the song (not that it was subtle) and teaching the crowd a fist-pumping sing-along.
Even if that registered as a quick faulty note, the fevered pace and genial nature of the setlist didn’t give the jaded in the crowd much time to harrumph, as they quickly moved onto their Steve Winwood/oldies tribute medley, “Get the Girl Back” (complete with a cute little two-step between Isaac and Taylor) and then – of course – “MMMBop.”
It was a final shot of delirious poppy energy for the crowd to get them to the finale – not that “Need You Now” or “Fired Up” need much help – and then to the encore. As a tribute to the band’s earliest days, even pre-instruments, Hanson opened up with a sweet and tight a cappella version of “Rockin’ Robin.” The tributes weren’t over either, as they then fired off a hat tip to Chuck Berry with “Johnny B. Goode” (alas, no Berry/Marty McFly guitar moves in sight) and, finally and fittingly, the rollicking “Man from Milwaukee,” a perfect personable closer to a perfectly personable night of pop rock.

I’ll admit that I walked into a Hanson concert skeptical, concerned I was going to get 90 minutes of “MMMBop” on repeat for a desolate crowd. But both the band and its fans convinced me that it’s a great thing that Hanson’s story didn’t end almost 20 years ago after its mega-hit and its quick time in the teen spotlight. It might have been Throwback Thursday down at Summerfest, but this wasn’t any nostalgia charity gig; Hanson’s performance would’ve deserved a headliner slot any night of the week.