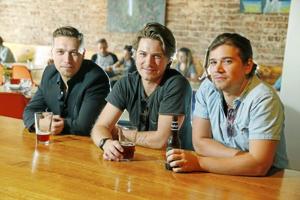 People from all corners of the world converge on Tulsa each year for one reason: Hanson.

The band’s annual Hanson Day weekend has turned into a sort of Hanson-Con, drawing fans of the band from everywhere to hear from the band and get a personal experience.

Hanson may be the initiation for the gathering, yet the experience for fans is much richer.

“Aside from Hanson, it’s the city,” said Tara Stringer, who is attending her fourth Hanson Day weekend and came to Tulsa from Ontario, Canada.

“And it’s our friends. It’s like a big extended family,” added Jennifer Parks, at her second Hanson Day weekend from Chase City, Virginia.

Each year is like a big reunion for Hanson fans. They talk throughout the year but see one another only once a year for a weekend in May.

It started several years ago just by fans getting together to appreciate their favorite band. Members of Hanson saw what was going on and wanted to give back a little more. Then that turned into a lot more.

“There’s a lot behind the whole idea of doing it, which we talked a little about, just the whole ethos of creating an experience,” Taylor Hanson said. “We made a call about five years ago to really start thinking of the weekend of … as this comic-con.”

Events include meet-and-greets, a concert, a dissection of the band’s second album “This Time Around” for its 15th anniversary and a gallery showing of art created by Hanson.

The fans love the experience, too. Free to members of the Hanson fan club, the events show exactly why the band’s fan base is so intensely drawn to the band.

“That’s what’s unique about Hanson: They give back to the fans,” said Brandon James, who made the trip to Tulsa from San Bernardino County, California. “They create the personal connection, so you feel part of it, part of the process.”

And for the band, it’s a time to both reflect on their own past through some of these panels and discussions and experiment with new sounds that will keep the band pushing forward.

The band’s last public release was “Anthem” in 2013, though they release an EP of a handful of songs each Hanson Day. This year’s EP does take the band in a somewhat different direction, a newer sound that sticks to its core but leaves a little room to experiment.

“The EP originally started out as something like B-sides. Over the years it’s become something where we take a week or two and write and record and give it a name, give it a look and a feel and a creative vision,” Zac Hanson said. “It will be the everything bagel this year.”

Hanson Day events continue to grow, as well. Last year, it took a big leap forward with the addition of The Hop Jam beer and music festival, which is actually open to everyone, not just Hanson fan club members.

Hanson fans also get a chance to explore Tulsa, to see a city as it changes and grows each year.

“We’re excited to go to Cain’s, and it’s such a historical area,” said Toni Spaulding, from Chicago. She also said she and her group of friends planned to go to Legends bar and country dance club on Thursday, a big night especially with the Kenny Chesney concert down the street at the BOK Center.

With the Hanson fan community banding together each year, and continuing to grow with an expanding weekend of activities and more people, it affirms why they come to Tulsa each May.

“I loved last year, seeing how many people here support them,” Stringer said.