Scientists are unclear on the exact length of time represented by an “MMMBop” – a subjective temporal paradox wherein a long period of time is perceived as a short period of time.

“It’s a reference to how time passes really quickly in your own life,” explains Isaac Hanson, who discovered the existence of the MMMBop with his brothers Taylor and Zac in the 1997 chart-topping song of the same name. “Suddenly half your life is gone and you’re wondering where it went … It’s an indefinable period of time only perceived by the individual thinking about it.”

Recent evidence: It seems like only an MMMBop has gone by since the kid brother trio from Oklahoma took the world by storm with its chirpy ode to the ephemeral nature of life – “When you get old and start losing your hair, can you tell me who will still care?” – and now the all growed up Hanson brothers play a sold-out Festival Place in Sherwood Park Friday night, their first proper gig in town. They haven’t changed a bit. Oh, maybe the keys to some of the songs have been taken down a bit, but “the nuts and bolts have stayed the same,” Isaac says.

Hanson is part of an elite club of musicians whose hit songs may be more famous than they are. For some, these life-changing, career-defining tunes became burdens of shame, albatrosses around their necks. Deep Purple singer Ian Gillan once said that “Smoke on the Water” seemed to take on a Frankensteinian life of its own, effectively holding its creators hostage. They tried taking it out of the show, he said, but bad things mysteriously started to happen – fans got really pissed off.

Hanson, which will play MMMBop at the show not because they have to but because they want to, doesn’t feel any resentment about their signature hit at all.

Isaac says, “First and foremost, every single story has a first chapter, and what better place to start than with an incredibly successful song that you wrote – allowing you to release multiple records for the 15 years and allowing you to attain the goals you set out achieve when you started?”

It means a lot when your defining song is a song you actually wrote, he says. Many young artists became famous for hits they didn’t write, which might make it difficult if it’s a song you’re not “emotionally attached to,” Isaac says. Not to mention financially attached, and he doesn’t want to get into that, declaring that Hanson “has never done anything for the money,” which isn’t the point. It’s just that it must also be hard to be slave to a hit that someone else gets all the money for. Ask the guy from the Bay City Rollers.

As for the burden of alleged one-hit wonderment, Isaac says that even people like Paul McCartney get typecast.

“Here’s one of the greatest artists of all time, so many hits you almost can’t count them, but he gets married the second time and the headline is, ‘She Loves Him, Yeah, Yeah, Yeah.’ Billy Joel Joel will always be known as the Piano Man, and it’s not even his most successful song. It doesn’t define him. No matter who you are, no matter how many successful songs you have, you will always shave certain songs that are identifiable to you – which is not a limitation in any way shape or form.” 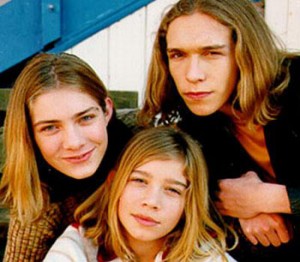 At least MMMBop wasn’t a freak of nature. Many a worthy band has had a mainstream career made more difficult by a hit song that doesn’t sound like any other music they did. Smash Mouth (Walkin’ on the Sun) and Soul Asylum (Runaway Train) are but two examples.

Hanson, meanwhile, still sounds like Hanson. They never broke up, they never went away, there was never any need for a big reunion. As Isaac says, the success of MMMBop allowed the brothers to make records for the last 15 years, aside from the bump when they got on the wrong side of a record label merger. Now on their own label 3CG Records and associating with people like Katy Perry and Taylor Swift, one of the band’s latest singles (from the 2010 album “Shout It Out”) is Thinking ‘Bout Somethin’, a boppy, bubbly track that evokes Up With People even while its expensive video pays tribute to the Blues Brothers (see below). The song oozes positivity and good vibrations, with lyrics like “if you’re not too proud to beg, I could give you some respect” paying obvious homage to the R&B stars of yore. In short, it’s perfectly in character for Hanson.

Grown up child stars have to prove their credibility twice: Once when they’re kids and no one takes them seriously, and again when they’re all grow up – and no one takes them seriously. Hanson has a lot of live up to. Their little song became so ubiquitous that they were subject to cruel jokes on late night television. Ellen DeGeneres once said of the youngest Hanson Zac, “She’s really cute.” On national television. And you thought high school was bad for bullying.

“So what?” is Isaac’s quite mature and reasonable response. “If you know us every well, you’d know we’re pretty headstrong. We’re not easily affected by that kind of thing. Here’s the other thing: It doesn’t matter of you’re 16 or 26 or 46, you’re going to have challenges. You’re going to either be too young, too old, too clean cut, too dirty, too whatever. And if you’re a hipster, you know what? You’ve got a curse, too. It means you can’t make it mainstream most of the time. It’s very hard to transition out of being so tragically hip.”

You don’t know how close to the bone you cut there, buddy.