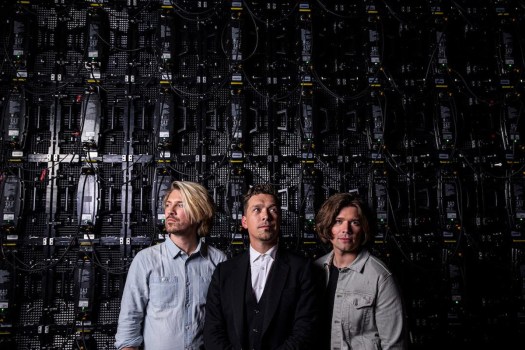 It’s been 25 years since Hanson became a pop sensation with “MMMBop.” And the brothers from Tulsa, Okla. — Isaac, Taylor and Zac — are working as hard, if not harder, now as they did back then.

Since that breakthrough, the trio has released another nine albums, two of them holiday sets, along with startling a variety of philanthropic initiatives and side businesses, including a beer called Mmmhops. It’s also toured regularly and added orchestral concerts to its live offerings.

Since the start of the pandemic Hanson has also performed a series of livestream concerts from Tulsa, which have continued into the fall. On Friday, Nov. 5, the group releases a new album, “Against the World,” which compiles tracks recorded at historic FAME Studios in Muscle Shoals, Ala. And middle brother Taylor Hanson promises that there’s more on the horizon.

• Taylor, 38 — who’s also been a member of the all-star band Tinted Windows — says Hanson envisioned the roll-out of “Against the World” somewhat differently. “The idea originally was that we would take people through this journey. They’d continue to get content throughout the year, but there’d also be a tour. We’d be somewhere in the world and a new single would come out and then we’d be somewhere else in the world and another new single would come out. With the pandemic and everything it didn’t work that way, but I would say I’m pretty happy with how we were able to adapt and keep people engaged.”

• The livestream concerts, he adds, have been crucial to maintaining that engagement with fans. “I would say connecting through the livestream concerts was essential. That live music, that live event, makes (the songs) feel like they’re still a part of something. That’s still one of the most effective ways to keep people excited. It’s been as effective as we can hope for in this time of limited access.”

• The songs on “Against the World” were created over time, worked on after the initial recording sessions at FAME during 2019. But Taylor hopes that a message emerges in the set. “We as people are trying to put something positive into the world. This group of songs I’m definitely leaning into mostly heavy messages. We started off with the most bright, the most pop songs in the spring, and it got heavier as it went. I’m glad it at least has cohesiveness, ’cause there’s no song that sounds the same or cut from the same cloth. But I do think it has a sense of itself by the time you get everything together. I think people will feel the sense of an album of a project, even if the songs are very different from one another.”

• With Hanson’s 30th anniversary as a band looming in 2022, Taylor says he and his brothers plan “something meaningful,” with new music and a hoped-for return to touring. “Actually getting to play and run round the world, that’s the plan. There should be new music from another project next year, but I’m reluctant to open up about too many details. But next year is going to be a pivotal year for us. I think the band being 30 years old is definitely important.”

• Taylor adds that the 30-year marks gives him and his brothers some pause to consider. “Y’know, some things feel like just yesterday, other things. … The strangeness of time becomes more and more vivid. It’s not linear. It does not feel like everything has just passed and here you are, this many years later. Certain things look extremely fresh. You can’t believe something was two decades ago. And other things feel like another life. Being proud of where you’ve been is important, but I would say for me it’s really important that we continue to forge ahead and push ourselves to go to new places.”