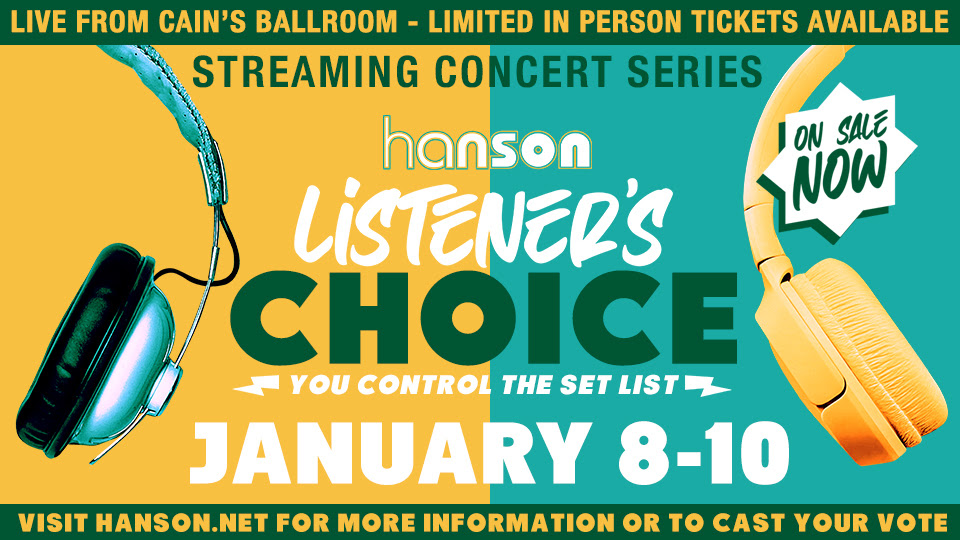 STREAMING CONCERT SERIES
For the fourth consecutive month, pop-rock trio HANSON continue their live streaming series from Cain’s Ballroom. Starting in October, the band’s concert series has featured a different musical theme each month, ranging from classic albums revisited to December’s Christmas Ball. With January’s live events the group is flipping the script and putting their fans in the driver’s seat for the Listener’s Choice series. Starting today, fans from around the world will be able to engage in daily polls, with head-to-head song voting putting the fans in the position to steer the sound and shape of each concert.

“For the last three months we have selected different musical themes and set lists. To start the new year right, we thought we should give the audience the chance to decide just what kind of show we play,” said Zac Hanson.

The unique concert series offers livestreaming events for fans worldwide, while also making a limited number of in-person seats available to members of the bands Hanson.net fanclub community. All in-person seating adheres to health and safety guidelines in light of ongoing Covid-19 restrictions. Hosted from the historic Cain’s Ballroom in Tulsa OK, the event also brings support to a local venue, and highlights the ongoing passion the band has for supporting local promoters and venues who are striving to weather the storm of many months without traditional concerts which are vital to their survival.

“The series at Cain’s has been an incredible way to stay connected with our community, and also draw further attention to the vital role independent music venues play in our industry. We are very grateful to everyone who has been a part of these livestreaming events,” added Taylor Hanson.