Back in 1997, when Hanson’s “MMMBop” became an inescapable hit, too many people wrote off the group as a boy band that would fade when its primary audience passed puberty.That was a huge mistake. Hanson never was a boy band – its three sibling members (ages 11-16 when “MMMBop” was released) were perhaps precocious, but were talented musicians and songwriters who since have released more than a dozen albums (four gold or platinum), had a half-dozen more hits and have consistently matured musically. 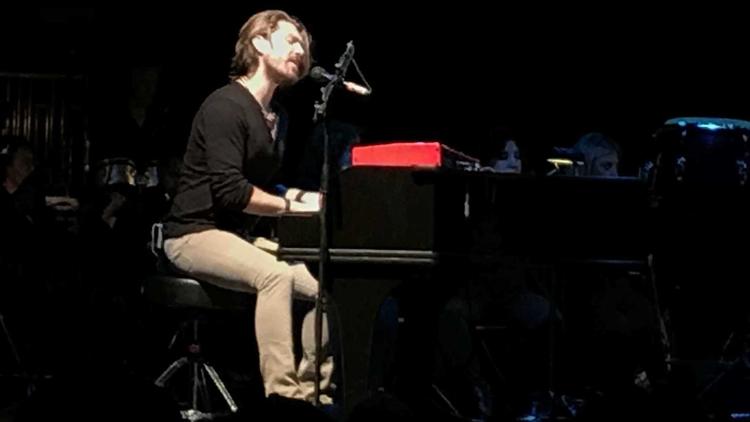 So while those original naysayers might have been surprised to see Hanson take the stage with a 36-piece orchestra Sunday at Tower Theatre in Upper Darby, it made sense to those who have watched the group develop. And it worked surprisingly well.

In a show of 23 songs over 90 minutes (plus an intermission), Hanson not only showed that it has matured into a band that can write capably for symphony treatment, but that its early hits also were sophisticated enough to be interpreted by an orchestra.

And Hanson chose a good one to do that Sunday. The 36-piece ensemble’s sound was lovely, lush and precise, and did precisely its purpose.

The show was a sequential performance of Hanson’s new symphonic album, “String Theory,” released Friday, that offers new songs and re-arranged versions of hits and other songs.

“Twenty-five years ago we started making music together,” eldest brother Isaac told the crowd as an introduction. And after a tour acknowledging that anniversary last year, Hanson decided “we need to do something different to start the next 25 years.”

And the opening of “Reaching for the Sky Part 1” made sense as a next move. With middle brother Taylor at the piano and doing most of the singing, the song was tender and symphonically lush at the same time: A mature, multi-layered move ahead for the band.

The next few songs did more to explain Hanson’s new direction. A re-worked “Joyful Noise” from 2016 showed the full sound of an orchestra. “Where’s The Love,” the 1997 hit that followed “MMMBop,” had more of a rock sound, but as neither fully symphonic nor fully rock was least successful.

But “MMMBop” showed the idea’s full potential. It was reinvented – certainly matured – but kept all of the essence with which fans fell in love. Pairing it with the 2012 song “Chasing Down My Dream,” with youngest brother Zac front and center playing good guitar, worked wonderfully. And the orchestration was at its best.

It seemed obvious that Hanson’s later compositions as a whole, made an easier transition to classical. “Tragic Symphony” from 2013 even had a funk edge that the orchestra handled well. “Siren Call” from 2016 was a natural for orchestral treatment, and was very symphonic – the drums and orchestra working together to build and maintain tension. And Zac’s vocals were very good.

“Dream It Do It” was far more orchestrated, and the slow, piano-based “Me Myself and I” from 2010, which closed the first set, also seemed to already have had a classic feel to it.

It also seemed that Hanson’s slower songs more easily made the transition. “Broken Angel” from 2004, with Zac on piano, was especially good. The same effect also worked for the also-slow “What Are We Fighting For” from 2015.

The symphony also worked on drum-heavy songs such as “Battle Cry” and “You Can’t Stop Us” from 2013.

In the cases where songs were less successful, it seemed to be because they were lesser songs. “Got a Hold On Me” from 2007 was elevated by the orchestration, but wasn’t as good. “Yearbook” from 1997 had a wonderfully classic piano and plenty of drama, but also wasn’t as good.

And halfway through the second set, it seemed as if Hanson needed to do more of its hits. If the group takes a second stab at orchestration, latter-day hits “Penny & Me” and “Georgia” would seem to be perfect for symphonic treatment.

The second set, after opening with “Reaching for the Sky Part 2,” another early hit, 1999’s “This Time Around,” again showed how well Hanson’s music transitions – and it got a big cheer from the crowd.

It show how, surprisingly, while Hanson has matured (Taylor had a full beard), its fans – a big majority female — clearly were still infatuated with turn-of-the-century Hanson. (The show had started with boy-band fan screams from the crowd.)

For “Something Going Round,” several in the crowd stood up to sing the end. And the crowd finally fully stood nine songs into the second set for 2016’s “No Rest for the Weary,” very good, with Taylor on guitar.

The show wound down with the very good 2017 song “I Was Born,” a combo of rock and symphony. “The Sound of Light” from 2013 didn’t change that much from the original version. And the closing “Tonight” was more rock than symphonic.

Hanson hasn’t been doing encores on this tour, but Sunday came back for an exquisitely harmonized, a cappella version of the National Anthem.

It, too, sounded very much classical, and very mature. But it also was purely Hanson.