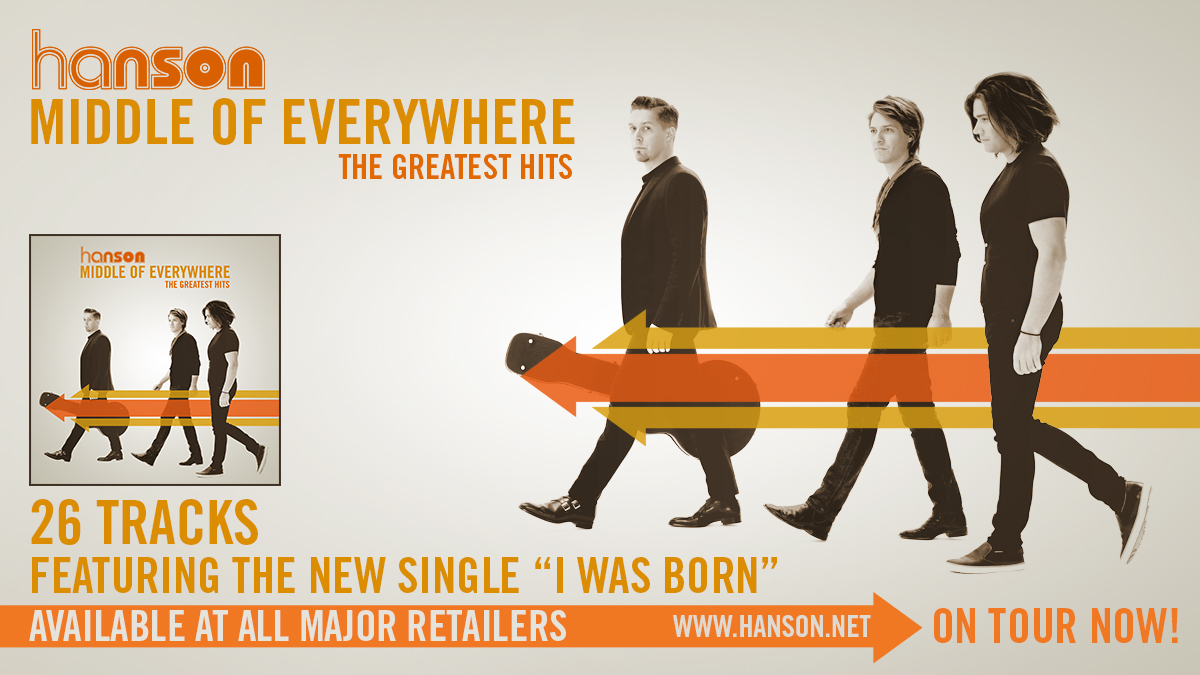 Sept 8th, 2017 – In celebration of the band’s 25th Anniversary, pop-rock trio HANSON are releasing their Middle Of Everywhere – The Greatest Hits, their first comprehensive career-spanning collection. The album includes hit singles spanning the last two decades, including “Mmmbop”, “Where’s The Love”, “Weird”, “This Time Around”, “If Only”, “Save Me”, “Penny And Me”, “Thinking ‘Bout Somethin’” and “Get The Girl Back”, plus their brand new single “I Was Born” that NPR music calls “impossible to resist”.

The album includes 26 songs from the multi-Grammy nominated band’s six studio albums, many of which are featured in their live show on the Middle Of Everywhere 25th Anniversary World Tour. The extensive world tour has seen the band performing to sold out crowds in Europe, Australia, New Zealand and Latin America, and begins it’s North American leg on September 12th.

“It’s incredible to be able to reflect on 25 years of making music together, and even more amazing to have been able make such a strong connection with music fans around the world”, said keyboardist Taylor Hanson. Added guitarist Isaac Hanson “The response to the tour so far has blown us away. Releasing the album and kicking off the US tour in the same week is very exciting”.

Besides HANSON’s 25th anniversary, 2017 is also the 20th anniversary of their debut release Middle Of Nowhere, lead by the iconic single “Mmmbop”, which introduced the group to the world. The tour will feature performances of the group’s most widely known material alongside fan favorites encompassing their extensive catalog since their iconic debut. In select markets, Taylor Hanson will DJ the “Dance Like You Don’t Care” after party, which will feature an eclectic mix of modern and throw back favorites..

Founded in 1992, the trio of brothers began performing classic rock ‘n roll and soul music, and writing original material, crafting a unique blend of harmonies and organic soulful pop-rock. The group took the world by storm with their debut major release in 1997, ushering in a string of top 40 singles and establishing them as one of the world’s leading artists.

In 2003, the group founded their own independent 3CG Records, starting a new era for the band with their #1 independent album Underneath, featuring hit single “Penny And Me”, positioning them among the most successful independent bands to date. Since then, HANSON has released 3 studio albums under their label, toured the world cultivating a vibrant global fanbase engaged by their dynamic live performances, and released an ongoing stream of special products direct to their devout fan community.

In 2013, the group diversified its brand with the founding of their Hanson Brothers Beer Company, and in 2014 added The Hop Jam Beer and Music Festival based in their hometown of Tulsa, OK, which brings together artists and brewers from all over the world, culminating in one of the country’s leading Craft Beer and Music Festivals with 40,000 in attendance. The Middle Of Everywhere Tour showcases more than two decades of music in a celebratory world tour, alongside new music that will be followed by a further release in 2018.

To find out more information on HANSON’s tour and music release go to www.hanson.net.

For further information on The Hop Jam Festival, go to www.TheHopJam.com.

For more information on Hanson Brothers Beer, go to www.hansonbrothersbeer.com