Liz traveled to Hanson Day from Wisconsin and met 2 friends from Chicago that she had met at previous Hanson shows once she arrived in Tulsa.  It was her friends first time going to Hanson Day as well!   Liz tells us that attending Hanson Day has been on her bucket list for years, but she decided to attend this year only because it finally worked out with her schedules and finances.

Liz was most looking forward to the lectures and seeing the memorabilia in the Hanson History museum.  She would have liked to have attended karaoke and thought it would’ve been a blast, but unfortunately was not able to get a ticket before it sold out.

Upon her return, it was the lectures that she enjoyed the most.  It was fun to hear stories about songs starting from years back.  She noted that the lines were long everywhere, but she expected that since they were expecting a larger crowd this year.  She thought it was great the 3CG was the location for the I Heart Hanson pop up store.  She also found the gallery was very cool and was able to purchase one of the copies of Zac’s paintings.

Liz’s favorite memory from the weekend was getting to the finals of the Hansonopoly tournament!  Although the tournament was long (time wise) it was fun playing with Zac in the end.  Hanson day was truly everything she thought it would be – Hanson spoil their fans! She hopes to go back again someday. 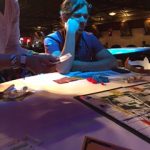 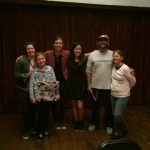 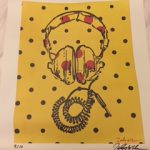