On Hanson’s first hit single, “MMMBop” — which went to No. 1 in 27 countries, was nominated for two Grammys, and helped the brotherly trio’s major-label debut Middle of Nowhere sell 4 million copies in the U.S. alone — the teen-idol siblings harmonized the surprisingly existential line, “In an mmmbop they’re gone/In an mmmbop they’re not there.” But 20 years after that single’s breakthrough, the Hanson brothers, now music business veterans in their thirties, are still very much here, celebrating an incredible quarter-century as a band. And this past weekend, their career came full circle as they returned to Austin, Texas’s South by Southwest festival, where they were discovered on a softball field way back in 1994. 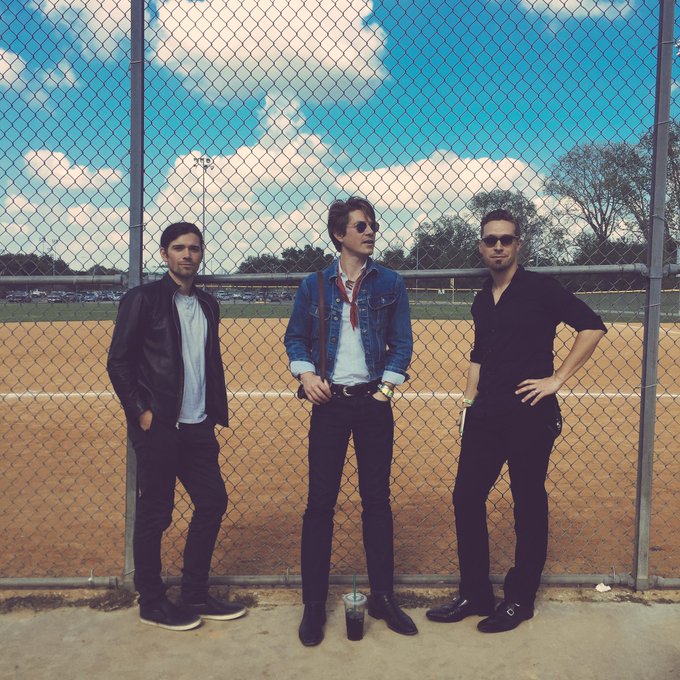 “We weren’t invited to play a showcase, nor did we know anyone in Austin,” Zac says. “We basically just showed up and started busking in the streets. Pretty much just anyone we could find, we would say, ‘Excuse me, sir, do you work for a record company? We want to sing you a song — can we sing for you?’ It really wouldn’t matter, so we did it in the streets; we did it at the record-label industry softball games.”

“We were building a fanbase, and we couldn’t play in bars, of course, but we would play wherever people would listen,” explains middle brother Taylor, now 34.

Zac admits that many of the jaded showbiz types that Hanson encountered at SXSW weren’t impressed — or were just taken aback to see youngsters roaming the “Live Music Capital of the World,” in search of a record deal. “It was a wild kind of experience: ‘Kids, singing in the streets, alone? Didn’t someone call Child Services on you?’ I don’t know, it wasn’t like that. It was just real,” he shrugs.

And of course, the brothers’ mom and dad were totally on board. “If you met our parents, it would make sense,” Taylor chuckles. “There was a lot of trust, and there wasn’t any fear of [the music business]. It wasn’t like, ‘Hey, if we walk down to this festival, all of a sudden drugs are going to be there, and you’re going to start doing coke at 10 years old!’ I think even in the most liberal, free-spirited families, people [have] this idea that you’re just going to be corrupted by starting young, by working young at things.”

“There was always a cautiousness about it, like, ‘OK, that one guy’s shady, and that guy’s shady,’” Taylor continues, “but yeah, [our parents] were behind it.”

Whatever the risk might have been when the Hanson family journeyed from Tulsa, Oklahoma, to Austin 23 years ago, the trip clearly paid off. The boys ended up at at a SXSW softball game, serenading a young lawyer, Christopher Sabec, accompanied by a boom box— and the rest was pop history.

“[Sabec] said, ‘I love what you’re doing; I want to be your attorney!’ We said, ‘We already have an attorney,’” Zac recalls. “He said, ‘Well, then, what do you need?’ And we said, ‘We need a manager.’ And he said, ‘OK. … I love what you’re doing so much, I’m going to figure out how to be a manager.’” Sabec quit his day job, moved to California, and “became the guy who helped us get signed. It was kind of a crazy thing.”

Taylor stresses, “The thing about milestones is, you don’t know until you’ve gone past them what things will stand out or what will be important. … You never would’ve thought that, going into the baseball diamond that day when it was hot as hell, that that would be anything to remember. But I do think that especially now, with technology and as we tweet out and share content and Facebook posts to our whole world, it’s important for young artists to have the experience of not just sitting in front of a YouTube camera, where no one can tell them anything they don’t want to hear and you can just delete the comments you don’t like.”

“Just having to just stretch those muscles,” Taylor elaborates. “I mean, yes, you can be great and talented, and, yes, the world has changed and you can make a record on a laptop, but the exercise of hitting the streets and being in front of people and getting positive and negative feedback, and actually figuring out how to push past it, that would be a good lesson for artists. … We as artists need to be tough enough to not just wither when somebody says, ‘Eh, I don’t know if I get that,’ and still push past it. We learned that pretty early on.”

Taylor certainly knows what he’s talking about. Although Hanson came up in a pre-social media age, the band’s early career did coincide with the rise of the Internet, and online detractors were vicious, ridiculing the brothers’ pretty blond looks and dismissing them as a manufactured boy band or novelty act. They caught plenty of flak in real life, too.

“Hanson haters showed up [at our concerts] with their signs that said, ‘I hate you, you girls!’ — or whatever the heck they said,” laughs Zac. “We’d say, ‘Wow, this guy just drove down, spent the time to make a sign, so that he could spend six hours waiting in line just to show us a sign. … That moron just wasted his whole day, basically, dedicating his time to us.’”

“’Thanks for buying a ticket! That’s sad.’ We felt bad for him,” says Isaac.

Back on the subject of the Internet, ironically, despite all the online hate Hanson received in the ’90s, it was ultimately the Web that turned them into teen superstars. “When we first broke, the whole industry essentially was almost laughing off the Internet,” Taylor recalls. “You had MTV.com and Hanson — those were the two top music sites on the Internet, period. So our fans were among those early [adopters], and so when we needed to transition and start our label, having the connection with the audience directly through the Internet was one of the ways that we built that.”

And now, Hanson’s placement in a post-digital music industry is secure. In fact, they’re an industry unto themselves, with their own label (3DG Records); their own craft beer (the amusingly named MMMHops); their own music festival (Hop Jam, taking place May 21 in Tulsa); a new single, “I Was Born,” which they debuted at SXSW; and an upcoming 25th anniversary tour. Says Taylor, looking back on the band’s humble SXSW beginnings: “I’m definitely grateful that we learned about work ethic early on, just the idea that you’ve got to work at things. … And part of what’s really cool about having some history is, if you survive long enough — in this business especially, because it really is survival — you get to help frame the past, and frame the truth of the past and what’s happened. Sort of like whoever wins the war writes the history books.”

And as for how the brothers have maintained their famous teen-heartthrob looks after 25 years? “We have a special elixir,” Taylor jokes. “It’s something that we keep to ourselves. You have to pay in blood.”