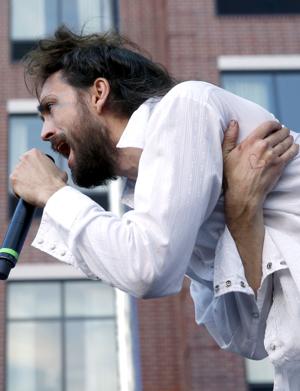 Alex Ebert, of Edward Sharpe and the Magnetic Zeros perform on the Main Stage during The Hop Jam Beer and Music Festival in Tulsa on Sunday, May 22, 2016. IAN MAULE/Tulsa World

T he wild party that Edward Sharpe and the Magnetic Zeros brought to The Hop Jam Sunday evening was a fitting end to a day full of music, beer and fun.

Each band had a distinct sound, from the heartfelt melancholy of John Moreland to a raucous set by Albert Hammond Jr. Music fans found something to like throughout the day while sipping beers from all over the world. X Ambassadors, Chase Kerby + The Villains and RVRB all made the third Hop Jam a memorable one.

Alex Ebert, frontman for Edward Sharpe and the Magnetic Zeros, knows how to command a crowd during a show. His wild movement on stage brings the crowd to his level. Fans and families danced the night away in the area in front of the Main Stage at Archer and Main Streets.

Their style of energetic folk music lends itself to a wild night. Their sound, coming from a huge band playing a variety of instruments, was solid throughout. Ebert, while wildly jumping around the stage and down into the crowd, kept his voice appropriate for the songs, not losing control except for when it seemed like he meant to.

The group based their sets on suggestions from the crowd, with fans shouting songs and Ebert obliging. That back-and-forth brought the crowd into the show in a deeper way. And it led the band to play their big hits, like “Home,” “Man on Fire” and “40 Day Dream.”

Hanson, who organizes The Hop Jam, didn’t play the headlining slot this year, but they did hop on stage for the encore, along with most of the rest of the bands who played throughout the day. No “Mmmbop” though, but the musicians played a fun rendition of John Lennon’s “Instant Karma.”

The brothers were also visible throughout the day all over the festival, introducing the Main Stage bands and pouring beer from their tent set up near their studio in the Brady Arts District.

Opening the festival on the Main Stage was the winner of the Tulsa World Opening Band Contest, RVRB. Sunday was one of their very early shows, but they played it like professionals, one of the true highlights of the evening. Cameron Mitchell has a fire for the electronic indie rock sound that was a treat for the early crowd around the Main Stage.

RVRB, like many of the early bands and those at Guthrie Green, unfortunately had a short set. It seemed like as soon as they started they were winding down, and that was a shame. As strong as they sounded, they could have had a much later set and played all night.

Families and fans got the chance to stretch out and relax at the Guthrie Green stage and were treated with some of the finest music in Tulsa.

All runners up in the Tulsa World Opening Band Contest, the five bands who played at Guthrie Green, were each unique and displayed great talent. Performers there included Sam Westhoff, The Young Vines, Nicnos, Nightingale and Groucho.

Westhoff, who is only 20, showed strong skill with his soulful voice, bringing bluesy grit to a rocking folk sound from his backing band. The Young Vines (who won the first Opening Band Contest in 2014 as Capitol Cars) have grown stronger and tighter with strong indie rock chops. Nicnos brought a fiddle to their hard rocking sound for something wholly unique and fun to watch. Nightingale combines folk and soul in a magical way, led by lead singer Briana Wright’s incredibly strong and sweet voice. Groucho’s gritty rock brought a palpable energy to the stage, a perfect ending to a stage full of unique local music.

I talked to several people while walking around the festival Sunday, and each person was as happy and excited as the last. With the third Hop Jam wrapped, it’s easily solidified its place as a must for Oklahoma festivals. Next year, which also happens to be the 20th anniversary of Hanson releasing their enormous breakthrough album “Middle of Nowhere,” the next Hop Jam is a day I’m already looking forward to.