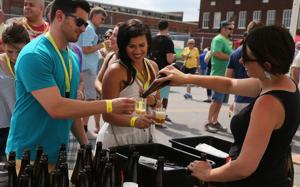 Colin Best and Taylor Gardener of Tulsa get a sample of beer during The Hop Jam in the Brady District. TOM GILBERT/Tulsa World

Give several breweries those same ingredients and chances are they’ll come up with a unique flavor.

“Something happens at a festival like this,” said Zac Hanson, one of the brothers who founded The Hop Jam beer and music festival. “There is a networking element to it. But it’s also a chance to build relationships so that one day, down the line, you might brew something together.”

On Sunday, more than 100 beers were flowing on Main Street in the Brady Arts District from 60 breweries featured at third annual festival.

Alongside free concerts, food trucks and family entertainment, a group of brewmasters were invited to speak in front of VIP and Hop Snob ticketholders during the Hop Talks, the newest activity added by the Hanson Brothers.

“It’s for that group of people who want to build a relationship beyond drinking beer. They can learn the history and the mindset behind the beer,” said Zac Hanson about the Hop Talks. “The brewing community isn’t so different from the band community, we like to share our process and learn from each other.”

The festival has grown each year to feature more breweries from Oklahoma, the United States and internationally. As the craft beer scene continues to evolve, many festivalgoers expressed an interest in learning more about their favorite brands and finding new brands to enjoy.

“So many breweries are hop-driven, but we approach it a little different,” he said from the stage at The Vanguard. “We like to say, ‘We should just try this.’ “

He was one of three brewers on stage invited to talk about beer alongside Taylor Hanson. Other companies included Tulsa’s Dead Armadillo Craft Brewing and Moonlight Meadery of New Hampshire. Carson talked about their FDR Imperial Stout, which is a malt heavy beer brewed with four varieties and roasted coffee.

“This is something I am very passionate about,” he said. “And there is so much enthusiasm between the different brewers here. We’re just feeding off each other to make a better product.”

Three Hop Talks were scheduled on Sunday with different brewers speaking at each session.

During the first session, festivalgoers Alicia Martens and Megan Laney, both from Orange County, Calif., sat near the stage to hear from the different brewmasters. Martens, who had seen the Hanson Brothers talk about their beer company before, was happy to learn more about the other brands at The Hop Jam.

“It was really cool to hear from them and what went into their beers,” Martens said. “This is the highlight of our weekend.”

Carson told the Hop Talks crowd he believes Oklahoma is ahead of the curve in terms of bringing great beers to the state.

“We’re behind in some ways, like our laws… but we’re second to none in the amount of great beer you can find here,” he said.