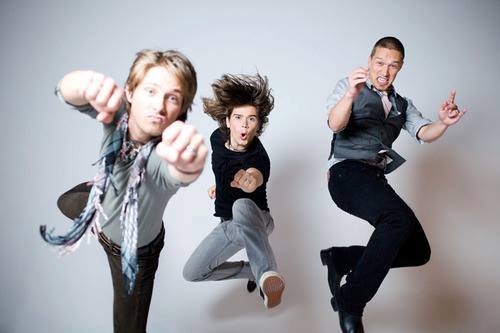 The brothers Isaac, Taylor and Zac Hanson are ready for the American tour that begins in October with 2 two consecutive show

By: Ingrid Natalie (twitter:ingridnatalie) Any band worth its salt has in essence artists who influenced the beginning to the present moment of his career. And honor those who serve as inspiration is, above all, show humility and respect for them. That’s the philosophy of the band Hanson that starts in October the tour “Roots & Rock’n’Roll”. It will not be any presentation. There will be two consecutive nights of shows in each city. The first night will contain only covers, accompanied by an after party. Already the second night setlist will be filled only by the band’s music.

For the Hanson brothers, playing covers is to get a chance to be a fan as well as being an artist, as you play your way the compositions of others. The songs are part of the history of the trio in one way or another.  “Covers play an important role in how we present ourselves to the fans and to the world”, says Taylor Hanson in an interview with the band’s youtube channel. He added, “we’ll have more time on stage highlighting our influences and our love for these artists”.
Not long ago, they did a live broadcast which showed how the band is preparing for the tour and released a video recording of “Remember The Time” the king of pop, Michael Jackson. The result can be seen in the video below:
Unfortunately the tour will only cover the United States, but it seems the band has new material to be recorded, probably in the first half of 2016. Once you launch a new original album siblings should go on world tour and will certainly include Brazil in the agenda. Let’s wait! For now, those are the dates announced: