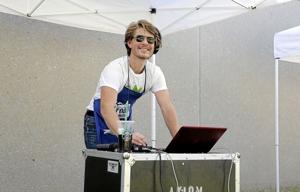 Taylor Hanson DJ’s during the Food on the Move event at the TCC Northeast Campus on Tuesday. MIKE SIMONS/Tulsa World

More than 400 people from various geographic and economic backgrounds gathered for lunch on the lawn outside the Tulsa Community College Northeast Campus on Tuesday for the inaugural Food on the Move.

The event is a collaboration of food and health experts and community partners working to mobilize good quality food into hard-to-reach economically challenged areas and help combat hunger.

“We are focusing on a deep set of challenges, which are not just hunger, but it comes back to the economy and comes back to the history of our city, and we want to help build a bridge that begins to change things in a unique way,” said Taylor Hanson, the local Grammy-nominated musician who worked to put the event together.

Food on the Move includes partners on the government, business and nonprofit level working together.

“The goal is to bring food to people who might be struggling while bringing together those who can and can’t pay,” said Eileen Bradshaw, executive director of the Community Food Bank of Eastern Oklahoma.

“Some of the people are nonpaying customers; some are paying a suggested donation, and others are paying for their meal and someone else’s.”

Food trucks at the event included the Doghouse, T-Town Gourmet and the Community Food Bank of Eastern Oklahoma’s mobile eatery.

Everyone who showed up was given a red ticket — regardless of what, or if, they paid — that was redeemable for lunch.

“I think it’s an important way to bring awareness to the fact that we are all in the midst of those who may need help,” Bradshaw said.

The plan is to hold similar events in other areas across Tulsa that are considered to be food deserts — areas without access to fresh, healthy and affordable food, said Meghann Ray, spokeswoman for Iron Gate.

She said Iron Gate, a downtown soup kitchen that provides meals seven days a week, is one of the agencies partnering with Food on the Move because of the goal of getting food to people who need it the most.

“This is a way for us to get food out to people and reach other areas in the community,” she said. “We’re pretty proud to get involved with these other agencies that are trying to fight hunger in the community.”

The Real Good Food Truck mobile grocery store was at the event, as well as representatives from the Tulsa Health Department and the U.S. Department of Agriculture.

Jackie Randles, who lives at the nearby Apache Manor public housing complex, said she took her family to the event after receiving a flier.

“It’s awesome to get to meet people who care about the community a little more than what we are used to seeing,” she said.

Randles was particularly interested in the mobile grocery store, which makes stops at the campus twice a week.

“We don’t have transportation, and the fact that we can walk and get meat and vegetables and other options than what they have at the little store up the street is nice,” she said.