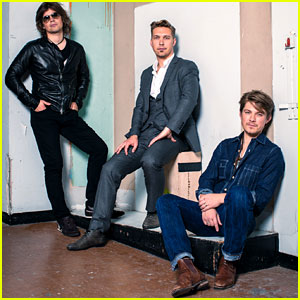 The 27-year-old musician and his brothers – Isaac and Taylor – have been playing together for over 20 years now!

The geniuses behind the pop culture classic “MMMBop” have a brand new album out titled Anthem, complete with a catchy lead single called “Get the Girl Back.”

JJ recently caught up with Zac to chat about the new record as well as theirstar-studded music video, and more!

Click inside to read our interview with Zac Hanson…

JustJaredJr.com: We were at your showcase recently in NYC. We’re loving the new music!

Zac Hanson: Thank you! It’s always interesting. A lot of the music we’re playing is brand new, never been heard, besides the single. So it’s always interesting to see the response from fans. It’s a special moment because it’s the first. Normally, the concerts have a level of participation, so that concert was not a typical audience by any means. It’s really interesting to look at the faces and sort of see people enjoying it, processing it for the first time.

JJ: We saw you smiling the whole time. Looked like you enjoyed it!

ZH: You can’t have the job for this long and not decide to enjoy it. It’s a decision you have to make every time you can on stage, like, “You know what, I’m going to have a really great time.” No matter how tired you are, whatever, you can’t hear and the monitor guy screwed up the mix or something, you just have to walk in and have a good time.

JJ: At this point, you guys have seemingly played all types of places and venues. Do you prefer bigger arenas or smaller venues?

ZH: It all depends, but I think small venues can be really nice because they’re intimate and it usually means only the really, really hardcore fans get in. It’s the people that are going to go to 15 shows on a tour or 5 or 10 shows on a tour. That can make it really fun. It also means you can play songs you maybe wouldn’t really play for a bigger audience. You can play that B-side or that verse of the song that’s a little different because you know you’ve got a really devoted group of people that will know those songs or will want to hear something they never heard before. When you play a bigger place, you know you have to play that audience a little different because you’re probably playing for more people who are not following the band as closely. We still have fun with it. This music in particular from the new album plays really well anywhere, but it’s a little more designed for a bigger room with a little more space. The sound is designed to have a little more natural reverb from the room.

JJ: How would you describe this album compared to your past ones?

ZH: I think the best way to describe it is to start with the last record and sort of move forward.Shout It Out was really, we’ve always been really influenced by the 50s and 60s, Motown, Rock and Roll. I think Shout It Out really put that in the forefront. So Anthem, the new record, it has a lot of the same heart as Shout It Out, but just a harder edge. There’s just like there’s more space in the sound. A lot of the music was really written thinking about the crowd participation – songs like “Fire It Up.” It’s certainly designed for the whole audience to scream back at you. That’s the whole idea is building this thing together. This stuff wasn’t really a big thing on Shout It Out, or really, any of our records. There are definitely songs that can be considered Hanson anthems. Songs like, “This Time Around,” from our second album. Or maybe a song like “Great Divide” from our fourth album. We get to the point, I’m like, “Wait, what album is that from?” (laughs). But I think this record is just designed more to have that vibe, a little more blues and the guitars just make it come back.

JJ: Definitely. So tell us about the video and how that concept came about.

ZH: The goal of the video was to make… almost like a movie – something you can watch and feel like there’s a story and there might be a place for another video, something that’s continuing. Through random things like social media, we ended up nailing the cast. We asked both if they would be into doing the video. It was just a mutual…we love their work, and their fans of the band. It was just perfect, a great group of people – Drew Seeley, a friend

of ours named Alex Beh playing the male counterpart, Paul McDonald, a vast group of Hanson friends, famous and unfamous. It was great. It was a one-day shoot. We were able to get it done really quickly. It was a crazy day where we had to shoot the video in between two concerts, so we had to get there at 4 a.m. and get out before the band set up to do a concert that night. The challenge was fun and everybody was just great. I think people say that and it sounds cliche – “Oh, it’s like a family!” But I think it was like a really good party, like when you get all the right people at a party and you’re just like, “This is a great vibe.” With like the bowl at the door, when you say, “Everyone put your cell phone in the bowl. You can’t use it. Just enjoy everybody’s company.” One of the cool things too about the video is the ability to put out the feelers to fans. Like, “Hey if you want to be in this video, come and be in it.” So most of the audience is made up of Hansen.net members or our fan club.

JJ: Cool! You guys have been doing this for a long time. How has the fan base evolved over those 20 years?

ZH: The core fan base has always been our peers. So when I was 12, there was a lot of 12-year-olds. And now I’m 27, and there are lot of 27-year-olds. I think the coolest thing about our fan base is seeing these people who have continued to vibe with our music and make it a part of who they are, and how they go through the world. The tattoos, all the crazy stories of going on tour, meeting their partners at concerts, or best friends

. Also, there’s this handing down of next generation Hanson fans, that’s a wild experience for me. Being in the band and watching it happen, meeting these people. The fans at 27 will walk up to you after the concert like, “Hey, I love you guys. I’ve been to 30 concerts. And this is my little brother/concern/nephew/whatever it is.” Seeing that happen is a really cool thing.

JJ: And what about being in a band with your brothers – has that gotten easier or harder over the years?

ZH: It’s not easy. I think if anything, getting older probably does make it harder because you have that many more quirks, you’re that much more stubborn, you have that many more responsibilities – kids, mortgages, you know? Things like that. When you’re 12 and a car breaks down, you’re not worried about that. Because a 12-year-old doesn’t take a car to the shop to get it fixed. Somebody else is dong those things. Even if you’re working really hard as a musician, you don’t have those added stresses of managing the household, so to speak. We have a deep history obviously, 21 years as a band, so musically, that does probably get easier. We know each other so well and when you’re playing a live concert and something’s happening, something’s going wrong, it’s less frightening. You just sort of figure it out. Like, “I’ve been to this rodeo before” (laughs). What happens next is you sing happy birthday to the sound guy (laughs) and that will give us three minutes to try to fix this problem, and if that doesn’t work, we start a drum beat and that gives us another two minutes. You know certain things you can do to try and survive through those moments.

JJ: You guys all have families now. How do you deal with balancing that and touring?

ZH: We find ways, but the reality is, we live a crazy life. Making a choice to be in a band means that you’re not going to do normal things. You’re going to experience… the way you raise your kids, the way you lead your life, it’s not going to be “normal.” We have this amazing life and you have to have that to make it work because the hours are long. And even when you’re not working, you’re an artist, you’re a creator. You’re life plays into what you’re doing every day. When inspiration strikes, you have to follow through with that. That can be at midnight on Sunday morning. It could be at 5 on a Monday when you’re supposed to be doing something “normal.” “Oh, it’s the weekend, I’m not supposed to be working.” You just have to find ways to be really present. That’s probably true of every relationship, but when you’re time together is more limited because your work requires so much of your time, you have to be that much more present when you are together and really make those moments count. I’m not always good at that, but that’s at least what you have to try to do, I think. That’s just how we make it through.