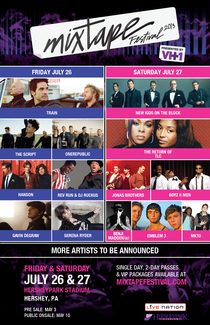 THE POP MUSIC FESTIVAL RETURNS FOR SECOND YEAR AND WILL HOST SOME OF TODAY’S BIGGEST NAMES IN MUSIC!

FESTIVAL REUNITES TLC FOR THEIR ONLY NORTH AMERICAN PERFORMANCE!

Tickets Go On Sale to the Public Friday, May 10 at 10am EST

“We are so thrilled to bring back the Mixtape Festival to Hershey,” said Geoff Gordon, Live Nation Philadelphia Regional President. “There’s an incredible lineup and tons of interactive and fun activities, all while being set at a world-class amusement park – it’s really a pop music lovers dream.”

Live Nation and VH1 are teaming up this year to present Mixtape Festival 2013. This collaboration will further solidify Mixtape Festival as a major pop show and serve as a means to enhance the experience with fan events, interactive exhibits, VIP Packages and so much more.

“VH1 is excited to partner with Live Nation for Mixtape Festival, the premiere pop music event of the summer,” said Rick Krim, EVP Music &Talent Relations, VH1.  “It’s a stellar line-up of artists that make up a large part of VH1’s musical backbone.  There is something for everyone and will make for a one-of-kind musical experience.”

This year’s VIP ticketing packages are a great option for the ultimate pop music fan wanting to experience the best Mixtape Festival 2013 has to offer. VIP packages will include: the best seats in the house, meet and greets with their favorite Mixtape artists, a ‘Rock N Jock’ dodgeball game, exclusive VIP after party with performances by Benji Madden and Rev Run & DJ Ruckus, and so much more! VIP package details and options are available at mixtapefestival.com.

This will be an exciting year for many of the bands participating in the festival.  Train is embarking on a huge tour this summer in support of their fifth album, California 37.  Tionne “T-Boz” Watkins and Rozanda “Chili” Thomas will be reuniting this year, marking TLC’s only North American reunion date.  Jonas Brothers will also be celebrating a reunion tour this summer. And New Kids On The Block have just released 10, their brand new studio album which debuted in the top 10 of the Billboard Top 200 chart, and are celebrating their 20th anniversary as a band.

“Mixtape was so much fun last year, the energy was there and the fans came out in droves to support.” said members of New Kids on the Block. “We can’t wait to do it all again this summer.  The festival is just continuing to grow and grow, only in its second year and definitely stepping it up already.  There will be tons of surprises and new additions that we can’t wait to be a part of.”

Single-day, two-day passes and VIP packages will go on sale Friday, May 10 at 10am and will be available at GIANT Center Box Office, MixtapeFestival.com, Ticketmaster.com, HersheyEntertainment.com, Ticketmaster outlets or by-phone at 800-745-3000. Two-day passes start at $50. American Express cardmembers will receive an exclusive presale beginning Friday, May 3 at 10am EST.

*Schedule and artist lineup is subject to change.