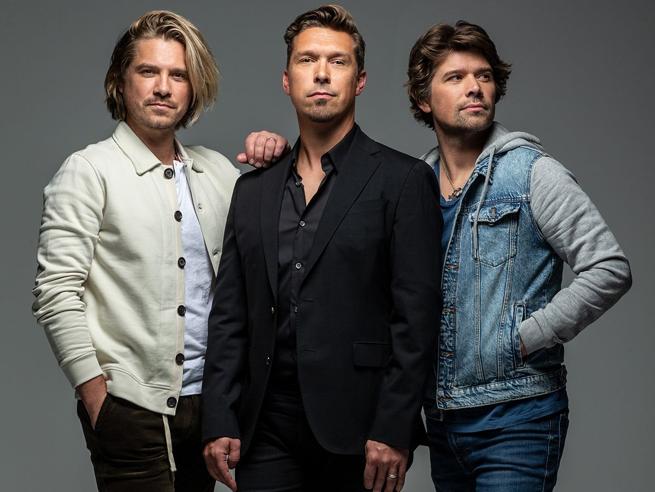 At the Magazzini Generali the concert of the trio of brothers from Oklahoma who at the beginning of the nineties experienced success as a baby band. And now, as adults, they continue to play together.

Among the advantages of starting to make music at a very young age is that of still being artistically and physically fresh to celebrate important anniversaries. The Hansons were a trio of Oklahoma wunderkinds founded in 1992 when the members were 12 (Ike), 7 (Tay) and 6 (Zac). So now these young adults can celebrate their thirtieth anniversary with a record, Red green blue, and a tour that today touches the Magazzini Generali. Zac, the youngest, the drummer, tells us this story.

Let’s start with the disc, which are actually three, one piece each.
“Oh yes, to celebrate these 30 years we have done a work divided into 3 parts: Red is written and produced by Tay, Green by Ike and Blue by Zac. Five songs each that tell each of us. We wanted to make people understand how much – while being a group – we are also three different people, three artists who then know how to put everything together and produce something homogeneous. Here you can feel the different styles, the different abilities of each brother, but also that as a band we still choose to make music together ” .

And what do you understand about her with “Blue”?
“That I am a romantic, I like ballads, pop, telling stories of serenity about the future to live with friends. They are songs that I wrote a long time ago, before this idea, about all the ballads. most of the melody, but it seemed to me that it was a song in need of a special place, and the end of this record seemed to me the perfect place. ”

In the concert, however, you also have another record to present, “Against the world” from 2021.
“Effects of the pandemic. And it won’t be easy to put these songs on the lineup, those of Red green blue and our hits. We will have to invent something. At the moment there are two ideas: a nice long concert, over two hours, and some medley”.

Speaking of this thirty-year anniversary, what are your balance sheets? Child prodigy bands usually have a bad end, not to mention siblings.
“But then there are the exceptions, and I am extremely happy that we are part of it. I understand the difficulties: playing with two people you grew up with, and above all as a younger brother, sometimes it is an amplifier of controversy and quarrels, but all that remains. between us also because it is precisely because of our family relationship that everything settles down in the end. Of course, then I like to be the youngest because it means that I have a lot of time in front of me. I have always loved being the youngest in the room because it meant that I would have had a lot of time in front of me. Thinking about it now, I am 36 years old, which is not many, but not too few, and I have 5 children “.

Who have no plans to start a band themselves?
“Not at the moment, not that I know of. But I tremble at the idea of ​​asking him.”

But is being a rock star as a child a good or a bad thing?
“In the end I think it’s good, of course I know how to do it. I reflected that at the time two out of three things didn’t interest me at all from the famous slogan” sex drugs and rock and roll “.

And have you ever thought about why your success in Italy? Make music that has little to do with our local melody.
“I asked myself yes, as in all other countries where we have a good following. The obvious answer is that we use a universal language like that of music is that we know how to communicate emotions, feelings and passions. In short, straight to the heart. we have never asked the question to Italian fans: we are afraid of breaking the magic “.
WHERE AND WHEN – Magazzini Generali, via Pietrasanta 14 at 20.30. Admission 25 euros plus presale, www.ticketone.it or 892.101