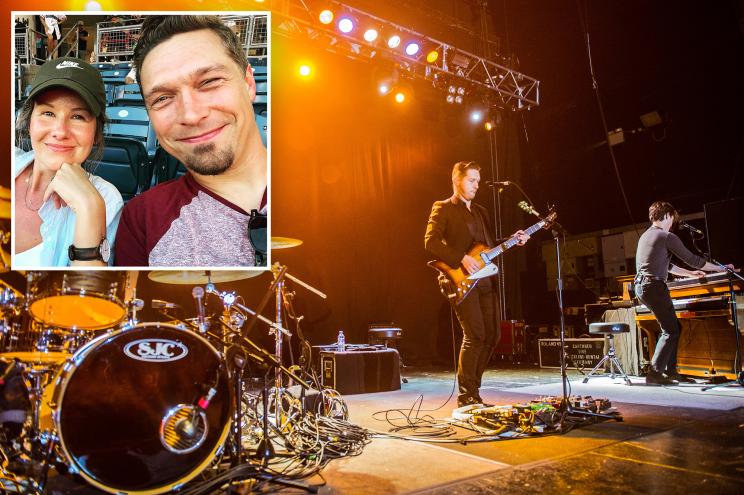 In an mmmbop, she could have been gone.

Isaac Hanson, 41, insisted there “was a connection” between him and his now-wife, Nicole Dufresne, when she was in the crowd of a 2003 performance by his band, Hanson. The two met only because he asked a stage manager to keep her back after the show so he could introduce himself.

Isaac said he “sang the entirety of the show” to her and threw guitar picks in her direction — all of which probably “freaked her out,” he admitted.

On the heels of the 25th anniversary of Hanson’s debut single, “MMMBop,” the band of brothers is once again making the rounds as they promote an upcoming world tour tied to the release of their 11th studio album, “Red Green Blue.”

In a cheeky segment, the group used the metaphorical meaning of their first hit song — an allegory for carpe diem — to reference times when they’ve “seized the day” in the past.

The interview took a slightly awkward turn when she probed the brothers about their wives.

“Isaac, the story of how you met your wife, it really chimed with me. You saw her — have I got this right? — in the crowd at a gig and you knew there was a connection, there was something,” Thornton asked the band’s eldest member.

“You went to the stage manager and said, ‘You have to stop her leaving,’ and that was the beginning of what has become a very happy marriage and beautiful family,” she continued.

“As moments go, it’s courageous, it’s audacious and it’s frankly inspiring,” Thornton mocked, before goading the other siblings to spill.

Responded Isaac: “I think that one takes the cake for me as a whole. It was both the most persistent and brave moment in some ways … I had to try hard.”

Zac, 36, interjected with a clarification: “You know what people may not realize is that Isaac met his wife by telling the stage manager, ‘Hey, that girl — I got to meet that girl.’ ”

Said Thornton, “It sounds grubby, I’ll be honest. It doesn’t sound … I struggle to make it sound romantic.”

Turns out, all three of them married fans they met during shows — with middle brother Taylor and youngest Zac both finding love in 2002 during a Hanson performance at a Macy’s in Georgia.

“Let’s simplify it,” Taylor, 39, pleaded. “We met them on tour in Atlanta, and yes, Isaac technically met both of our wives first.”

Attempting to unweave this tangled web of wives, they further explained that both Taylor and Zac had spotted their soon-to-be spouses as the two women were working as models. Isaac then recalled how he had urged the women to “say hello” to his two younger brothers.

Ruefully, he then confessed that Dufresne was likely “kind of freaked out” by his aggressive approach. “My wife is quite introverted, and I think she was a little thrown because I was so gung-ho — like, ‘Hey, we should hang out, we should do some stuff, I’m only here for so long.’”

Nevertheless, it worked. Isaac and she married in 2006, followed by Zac and Kathryn Tucker later that year. Meanwhile, Taylor had already married Natalie Anne Bryant in 2002. The three brothers and their wives share a bevy of 15 cousins between them.