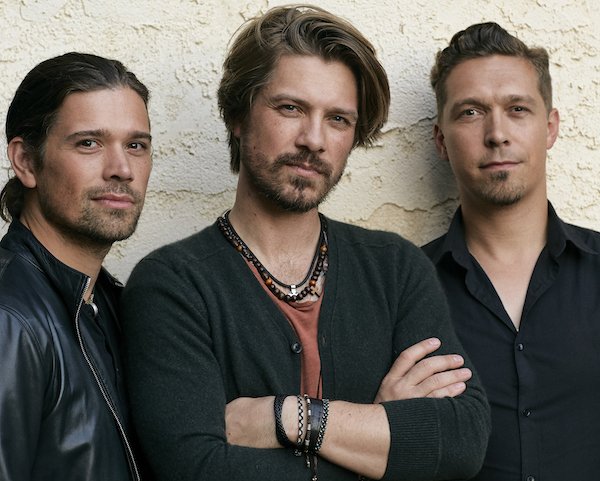 From left: Zac, Taylor and Issac are still Hanson and are performing at this year’s SPARC Live Art: Family June 2. (Photo by Jonathan Weiner)

SPARC, the School of Performing Arts in the Richmond Community, brings students from their Live Art program and professional musicians together for an evening of celebration on June 2. Among the artists performing at the annual concert benefiting the organization are Virginia native and SPARC alumnus Jason Mraz, as well as the Grammy-nominated pop trio Hanson (“MMMBop”) and local favorites Steve Bassett, Susan Greenbaum and Josh Small.

Hanson recently released their eleventh studio album, “String Theory,” and are nearing the end of their current tour. Isaac Hanson, the eldest sibling in the group of three brothers, spoke with us from his hometown of Tulsa, Oklahoma.

Richmond magazine: Going on almost 30 years together, how have you avoided the burnout that some bands experience?

Isaac Hanson: Well, that’s a complex question to answer, so what I’ll say is this: Over the last 25-plus years that we’ve been doing this together, you go through various seasons, and sometimes you slow down a little bit, sometimes you gotta speed up, but we have, I think, maintained a certain degree of sanity and connectedness to each other by maintaining a certain degree of constancy about what we do, that has actually I think kept us from falling into a rut or getting stagnant. I think one of the biggest things that has helped us stay creative and stay interested is that we do a five-song EP every single year from scratch, specifically for our fan club. We do that, and it’s kind of like there’s no rules, there’s just, “Write a great song.” You know, no matter what style, no matter where you go, sometimes it goes all over the place and gets Rocky Raccoon/Beatle-y, sometimes it’s real electric guitar-heavy and kinda rock-riffy kind of stuff, sometimes it’s really R&B, sometimes it’s singer-songwriter-y. It kinda depends on where you are creatively or what mood you’re in at that time, and I think that’s one of the things that’s kept us sane over the years, but in addition to that, taking on unique challenges.

And one of the most unique challenges we’ve taken on in the last 25 years is this recent project called “String Theory,” which is probably the closest thing to a musical we’ve ever done, because in a lot of respects, it is one very connected musical work. It’s separate songs, but there’s very much a story, a narrative, a theme to the whole show, which is in some sense autobiographical, but it’s mostly, ultimately about the fact that all of us have dreams, desires, and ultimately, I believe each of us [has] a purpose in the world. And finding that purpose, chasing that purpose and not letting it defeat you, not letting the chase defeat you … is a huge part of living a productive and joyful life.

RM: Looking back, how do you feel about “Middle of Nowhere,” the album that led to your success?

Hanson: I mean, what a great way to start off a career, to have the chance to, with your very first record, to have fans around the world that know your music, that know who you are, that are interested in what you’re doing. And ultimately they have stayed surprisingly connected with us over the years, even though there have been quite a few different ups and downs along the way. But they’ve stuck with us, whether it’s people in Australia or people in Europe or people in South America, throughout Asia, we’ve had a lot of continued opportunities to stay connected, and you can’t predict every detail of a career. Careers are kind of like roller coasters, you kind of do your best to stay in the seat and hold on, and they’re a lot of fun, but they can make you hurl, too.

RM: What brought you to SPARC, and how did you meet Jason Mraz?

Hanson: Well, for one, Jason reached out to us, and we’ve known Jason for at least seven years. It might be a little more than that. In fact, he has a guy who’s played with him pretty consistently for the better part of the last seven to 10 years, a saxophone player and horn arranger, who’s a mutual friend of ours. So we kind of reconnected a few different times over the last couple years in particular, and then this just came up. He said, “Hey, guys, would you be interested in being a part of this?” We said, “Absolutely! That sounds great, sounds like a lot of fun, sounds like a really special event, and we’d love to be a part of it.”

RM: Is there anything extreme that a fan has done to get your or any of your brothers’ attention during the height of your fame?

Hanson: It’s all the stereotypical stuff, all the things you can think of I’m sure have been done in some form or another. To be honest, I have a little bit of amnesia with regard to some of that stuff because to be honest, my normal is everyone else’s super-freaking-weird, and so I just try to not think about it too much and try and not let all those crazy things get to me and turn me into some, shall we say, unlikable human being. But we’ve had a lot of really great connections with the fans over the years, I think most — I think the most important thing for me and the most dominant element of our relationship with our fan base is ultimately music-related. And that has a lot to do with us. We’ve pointed everyone at the music every single time and said, “Look, we really appreciate your enthusiasm and excitement and all that,” but for me more than anything, music is therapy, it’s there to help us get through life and to inspire us and fight the good fight and live for another day and all of those kind of things. And so we have a lot of amazing, substantive musical connections with all these people.