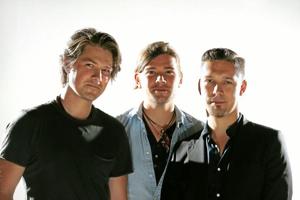 Taylor, Zac and Isaac Hanson, shown in their studio in 2015, are launching a world tour. TOM GILBERT/Tulsa World file

The reason he fielded the question is because he and his brothers — you know them as the pop-rock act Hanson — announced dates Monday for a 25th anniversary world tour.

Continuing, he said this: “But I will say we have had some incredible experiences over the last 25 years and, truly, we feel like we are just getting started. That’s probably the most exciting thing is to feel like there is so much in the future. Part of continuing for years is that constant desire to look ahead. And with this tour we are really, for the first time, properly looking back just enough to kind of celebrate that history with a lot of fans that have been with us and really acknowledge that. Ultimately, it all still leads to where we are going next.”

As previously reported by the Tulsa World, Hanson will headline the Hop Jam beer and music festival May 21 in Tulsa’s Brady Arts District. The Hop Jam performance will kick off the world tour, which officially begins with a swing through Europe in June.

“Making music together for 25 years is a milestone that we had to acknowledge, and what better way to do it than with an anniversary tour,” Taylor Hanson said in a press release.

Added guitarist Isaac Hanson, “This year is not only about the two decades of music, it’s about celebrating the incredible community of fans who have been with us, singing along year after year.”

Believe it or not, it has been 25 years since Hanson was formed. It may seem like “only” 20 years because that’s when a debut album (“Middle of Nowhere”) and smash single (“Mmmbop”) introduced the soulful Tulsans to the world. But the trio of brothers spent five years before “Middle of Nowhere” building a sound that would earn them Grammy nominations and 16 million in album sales.

Among topics broached with Taylor Hanson during a Monday telephone interview:

He said he and his brothers are thrilled to celebrate 25 years of making music. And it seemed natural to kick off the tour at Hop Jam.

“For the last four years, we have really invested ourselves heavily in what we are doing here in Tulsa and the craft beer movement that we are a part of with our Hanson Brothers Beer Company,” he said. “And it just made sense that it was a great moment to kind of come back to the stage after not playing the festival last year and bring it all together.”

He also indicated it’s an opportunity to draw attention to Hop Jam. The festival’s role in the tour was mentioned in a press release posted Monday on hanson.net, which means Hanson fans around the world now know about the existence of Hop Jam.

“It’s an opportunity for us to further highlight this special thing that we have been trying to build here in our neighborhood,” he said.

The scope of the tour

Hanson’s upcoming tour is the Middle of Everywhere 25th Anniversary World Tour. Truth in advertising? The tour will take Hanson just about everywhere. Dates for Europe and North America were announced Monday morning. Tour stops in Australia and South America will be announced at a later date. Taylor Hanson called it the most comprehensive tour for the band in at least a decade.

“We have really taken a lot of time over this last year to road map out how do we logistically get to as many places as possible and be able to say, hey, this really is a world tour,” he said.

The tour will feature performances of the group’s most widely known material and fan favorites from their body of work. In select markets, Taylor Hanson will DJ a “Dance Like You Don’t Care” after party, which, according to a press release, will feature an eclectic mix of modern and ’90s favorites.

The name of the tour

“It’s a tip of the hat to where we have been,” he said. “Just the look and feel of this tour, we are very much acknowledging the connection that we made with fans 20 years ago with that first break-out record and we’re giving people a chance — we’re making it OK to remember what their Hanson memories are, whether they have discovered the band two albums ago or six albums ago. We are kind of giving everybody permission to remember or enjoy or celebrate with us that we have had a chance to keep our jobs as musicians for this many years.”

The album, titled “Middle Of Everywhere — The Greatest Hits,” will include hit singles “Mmmbop,” “Where’s The Love.” “Weird,” “This Time Around,” “If Only,” “Penny And Me,” “Thinking ‘Bout Somethin,’” “Get The Girl Back” and a new single, “I Was Born.”

Taylor Hanson, one of the brothers in the pop-rock trio, was asked about the project during a Monday telephone interview.

“Greatest hits, that phrase is a funny one because so much of your history is in pieces,” he said. “It’s an album here or a song there. So this collection doesn’t cover everything because you can’t in one (album), but it really does, I think, encapsulate the music of multiple albums and it not only hits on singles, but it also includes kind of key songs from the different albums.”

Added Taylor Hanson: “Once that release date is announced and it’s in peoples’ hands, it’s one of those things that if people are kind of rediscovering or getting into the band for the first time, it’s the kind of thing where you get it, and then you get a really good sense of where we have been. And then you can dive in and search out albums you may or may not have since we started.”

Hanson 25th anniversary world tour dates
Hanson will kick off a Middle of Everything 25th Anniversary World Tour with a May 21 performance at Hop Jam in Tulsa’s Brady Arts District.