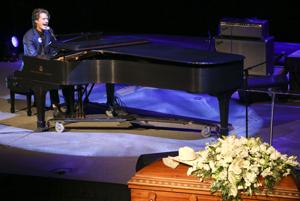 Taylor Hanson sings in tribute to the late Leon Russell during the Memorial Service for Leon Russell at the Mabee Center in Tulsa, Sunday Nov. 20, 2016. JESSIE WARDARSKI/Tulsa World

Leon Russell came back to Tulsa just one more time.

The iconic singer, musician, songwriter and friend to many who influenced and shaped rock and roll was celebrated with stories, laughs and tears from thousands Sunday at a funeral for Russell, who died Nov. 13 near his home near Nashville. He was 74.

Born Claude Russell Bridges in Lawton, Russell got his start as a musician in Tulsa in the 1950s and started down a path that would take him to stages around the world, playing alongside some of music’s biggest names and influencing their own sound.

“That’s what Leon did: He made magic, and helped a lot of people in his music and art,” said Jim Halsey, a renowned promoter who worked with Russell and was a lifelong family friend. “Their art and their music can do a lot of healing.”

The full effects of that musical healing were felt Sunday. Along with stories about Russell’s life from Halsey and others who worked closely with Russell, performances of “Home Sweet Oklahoma” by John Fullbright and “A Song For You” by Taylor Hanson led the crowd to bob their heads in rhythm as many wiped away a tear. Russell’s band for the past several years of extensive touring joined them on stage, including Jack Wessel and Tulsa natives Beau Charron and Brandon Holder.

“Leon was a master of that healing with his music.”

Thousands packed into the Mabee Center auditorium, with a casket under the spotlight, radiating light off the white flowers and Russell’s classic white cowboy hat. A city proclamation to declare Sunday Leon Russell Day was presented to Russell’s family, including wife Jan Bridges who hugged her loved ones as the proclamation was read.

But many there Sunday wanted to share their stories about Russell, what made him as a musician and what set him apart as a friend and mentor.

Ripley started working as a sound engineer for Russell, was fired by him in Los Angeles, but eventually got back to working with him and playing with him. When Ripley and his partners took over ownership of Russell’s famed Church Studio just east of downtown Tulsa on Third Street, the first recordings were a bit of serendipity.

“Leon was the first person to record there. They brought him and took over,” Ripley said. “He loved being back in that old studio and having his friends drop by and say hello.”

Many talked about Russell’s musical prowess, which was quickly recognized in the studios of Los Angeles when Russell moved there from Tulsa at 17. He became a go-to session musician and well known as a top player in the town. That led him to work with the Beach Boys and put him in front of crowds leading Joe Cocker’s band with the Mad Dogs and Englishmen.

“Like (Tulsa-based musician who played with Russell frequently) Jim Karstein likes to say, as soon as Leon got in and showed his stuff, he went right to the top of the stack,” said Steve Todoroff, a longtime friend of Russell, who has worked to collect all of the old 45s and LPs that Russell played on throughout his career. He’s donated the hundreds of items in that collection to the forthcoming Oklahoma Museum of Popular Culture.

Musician Bruce Hornsby spoke Sunday about his experience working with Russell. Hornsby recognized the special talents Russell had that set him above the rest. Like when playing, Hornsby said you could turn off the metronome keeping time and let Russell play, and if you turned it back on minutes later, Russell wouldn’t have skipped a beat.

“The way that guy could groove, he was a human metronome,” Hornsby said. “It was a great goal of his: He wanted to write songs for the Great American Songbook.”

Russell recorded a series of pure country albums under the moniker Hank Wilson, flexing his muscles in the genre of his home while showing off his skills in rock, blues, soul and gospel.

“To hear him with those Nashville guys, he sings them down one after the other,” Ripley said. “It’s an astonishing thing, above some level where the rest of us are.”

It doesn’t happen often, Ripley said, but every now and then there’s “a crack in the cosmos” that allows a great, profound and prolific artist like Elvis Presley, Bob Dylan and George Harrison.

“Leon was one of those crack-in-the-cosmos guys,” Ripley said. “They can’t explain their thing. The rest of us just work for a living.”