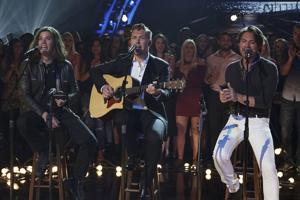 Tulsa’s Hanson performs on “Greatest Hits: 1995-2000,” airing at 8 p.m. Thursday on ABC, channel 8, cable 1008. In addition to an acoustic performance of “MMMBop” off its 1997 album, brothers Zac (left), Isaac and Taylor will also collaborate on stage with Echosmith. BYRON COHEN/ABC

Get ready to celebrate the greatest hits of the 1995-2000 musical era, including “MMMBop” by Tulsa’s Hanson. The second half of the 1990s launched huge careers for the biggest names in pop, rap, hip-hop and rock music. Watch this show for collaborations with Backstreet Boys and Meghan Trainor, Coolio and CeeLo Green, Jewel and Tori Kelly, LL COOL J and Wiz Khalifa, John Legend singing Lauren Hill, an acoustic performance of “MMMBop” by the Hanson brothers, plus a Hanson-Echosmith collaboration.