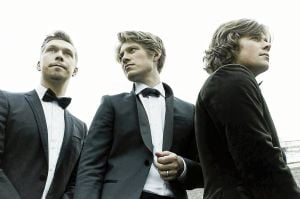 Hanson brothers Isaac (left), Taylor and Zac will play their first show in Oklahoma in two years at Hop Jam 2014 on May 18. JIRO SCHNEIDER/Courtesy

What the Hanson brothers saw in Oklahoma’s craft beer world was much more than just a love of beer. The state’s brewers and beer lovers were part of a tight-knit community.

It was an independent spirit they were familiar with on their own record and independent projects, including their own beer, MMMhops. So for Tulsa natives Isaac, Taylor and Zac Hanson, combining their love of music with their love of beer and all things local seemed like a natural step.

“We went back to being independent in 2002, launched our label in 2003, and we feel a kinship between independent music and the growth of craft beer,” Taylor Hanson told the Tulsa World.

Thus was born Hop Jam 2014, a beer and music festival hybrid set for May 18 in the Brady Arts District.

The free music festival will feature a concert by Hanson  the brothers’ first public show in Oklahoma in two years  blues/rock jam band Robert Randolph & the Family Band and another national act to be announced. There also will be a contest to find a local band who will get to perform at the festival.

At the same time, virtually all of the craft brewers in Oklahoma will offer their variety of styles and beers at an expansive beer festival, all centered around Main and Brady streets. Beer can be purchased via tickets sold at the festival.

“This is half music, half beer,” Taylor Hanson said. “It’s a full concert and a full-on beer festival. If you’re going up there and you want to try beer and you’re walking up and down Main Street, you can hang and watch the show while everything is going on. If you’re not into beer, you can set up and enjoy the show and walk back and forth. It appeals to both sides there.”

It’s the first time for the band to put on a festival this large encompassing both worlds of music and beer so wholly, but it’s one they hope to continue.

The seed for Hop Jam started when the brothers began to get deeper into the world of craft beer, which has been exploding across the country and in Oklahoma, Taylor Hanson said.

“Our focus has always just been to really connect our passion and connect with people who have followed us,” Taylor Hanson said. “This same spirit inspired us to get in the beer world in the first place. A couple years ago we said this craft beer community is really an amazing one, and we’ve become knowledgeable and pretty passionate about lots of different beers across the country.”

The date of the festival  May 18  was chosen specifically, Taylor Hanson said. The band made its first public performance at MayFest in 1992. The album, “Middle of Nowhere,” which sold 10 million copies worldwide and included the hit “MMMBop,” was released in May 1997. The band hosts Hanson Day every May, which this year will coincide with Hop Jam.

Hop Jam will take place on the last day of MayFest as festivities there are winding down.

“We feel like this is the crescendo, the exclamation point at the end of that weekend,” Taylor Hanson said.

It also happens to be American Craft Beer Week and the day after another craft beer festival in Oklahoma City.

“That’s where the idea came from, sitting down and thinking where we wanted to be and how we wanted to be a part of the beer community, nationally but especially in Oklahoma and Tulsa,” Taylor Hanson said. “We’re one of the new guys in beer in Oklahoma, so we have a huge amount of respect for those who have been doing it longer than us and really paved the way for people to discover craft beer in the state and in Tulsa.”

Taylor Hanson said they will also be launching their beer MMMhops nationally soon, as well as premiering a new beer at Hop Jam. Many of the other brewers at the festival will have a special beer to feature at the event.

Now that Hanson is part of that beer world in Oklahoma, as well as a part of the music community, when the idea for the festival came, it was a matter of a few phone calls.

“So we just began to reach out to people we knew and said ‘Hey, if we did this event, which is a mix of our two worlds  music and craft beer  would you show up?’ We went around the circle and just got really good responses,” Taylor Hanson said.

The festival also wants to bring attention to the local music community by featuring a local band chosen by fans to perform before the group at the festival.

Taylor Hanson said that the band will have a unique chance to perform for the audience before Hanson takes the stage. And they will be part of a musically diverse lineup with Hanson’s pop/rock and Robert Randolph’s wild party blues/rock.

“We were looking for a combo of artists that welcomes everybody,” Taylor Hanson said. “Robert connects with the blues stuff, the real classic rock ‘n’ roll, gospel. He’s got a little old and young, and it’s a party. With us and them, it’s an environment of celebrating the kickoff of summer and this really cool counterculture of craft beer.”

But what it all comes down to is fostering the sense of community around not just beer and music, but around Tulsa and Oklahoma.

“We’re really hoping people embrace the idea that this is an event for everybody,” Taylor Hanson said. “If you’re coming down and want to catch the music and enjoy an awesome music night, you can bring families and enjoy this event. And people who are really passionate about beer can just go crazy and try all the beers.

“We’re hoping to create an event that brings all of those people together.”

Local bands can compete to play at Hop Jam 2014

Enter your band now for a chance to play before Hanson at Hop Jam 2014.

To enter, go online to tulsaworld.com/hanson between now and May 3 where you can upload a video of you or your band performing. From the submissions, the top five bands will be chosen.

Once the top five are announced, voting will take place May 4-10 with the audience choosing the winner to be announced May 11.

The artist must be from Oklahoma. Find the full contest rules and details at the link above.

And stay tuned for more contests and prizes.

Where: Brady Arts District, centered around Brady and Main streets

What: Beer and free music festival, featuring Hanson, Robert Randolph and the Family Band and two bands to be announced; beer from Oklahoma brewers; food trucks and more