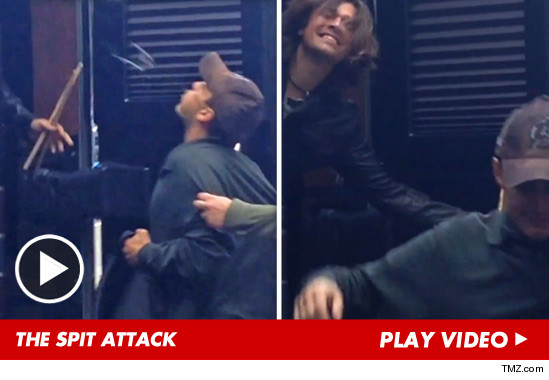 Zac Hanson — the drummer from Hanson — was the victim in a disgusting spit attack on his tour bus in Seattle last night … and the gross moment was all caught on video.
Here’s what we know — the spitter somehow got onto Hanson’s tour bus … and as Zac was trying to boot him from the bus, the guy unleashed a big nasty loogie that hits Zac right in the head.
You can see the spit dripping off Zac’s hair … it’s really disgusting … but Zac simply brushed off the incident, and smiled as if it was no big deal.
As for the douche bag … he simply turns and walks away while cursing out some of the people surrounding the bus.
After the incident, Zac tweeted … “Gonna be a good show tonight, I cleaned off all the spit and I am feeling ready to go! -Z”