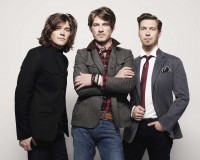 Some might’ve scoffed at the ‘MMMBop’ hitmakers tour announcement recently, but scoff no more – their Melbourne, Brisbane and Sydney shows are completely sold out.

The new shows sell to their rabid fanclub on Monday 30 April from 9am, and to the general public on Tuesday 1 May from 9am. And the remaining shows are reportedly selling fast. Get to it.