It has been almost three decades since Hanson first toured Australia and after the world was shut down for two years, the brothers are excited to be back Down Under.

Isaac, Taylor and Zac first started performing together in the early 90s and broke out internationally with their number one hit ‘MMMbop’.

The brothers are now back in Australia for their Red Green Blue tour and told Today Extra they have enjoyed reconnecting with fans. 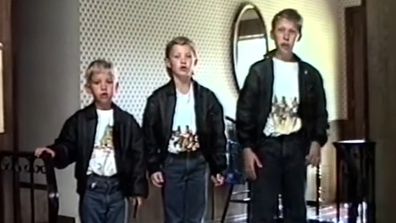 Zac, Taylor and Isaac (L-R) have been performing for 30 years. (Supplied)

“Mostly I think people are just really excited to be back together,” Zac told Today Extra.

“We are always trying to put on a really high-energy show, but there’s something special about right now. I think it feels like a family reunion.”

Taylor said it was nice to connect with people who had been with them since they first started out and also with the new younger generation of fans as well.

“We see people that have been with us for 25 years, since the first time we came to Australia, to people who are literally younger than several records – that’s the power of music,” Taylor said.

“There’s definitely a lot of dedicated fans, that’s for sure.”

Hanson skyrocketed to fame in the 1990s, breaking out internationally with their hit ‘MMMbop’.

But the pop-rock trio looked very different when they made a rare appearance in Sydney on Thursday.

The three brothers, Taylor, 39, Isaac, 41, and Zac, 37, were seen arriving to KIIS FM’s studios for an interview amid their Australian tour. 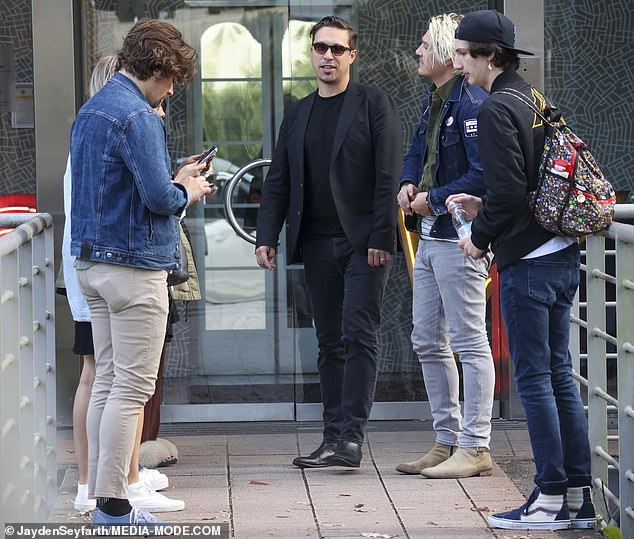 My, have they changed! 90s heart-throbs Hanson looked very different as they stepped out in Sydney 25 years after their mega hit MMMBop was released 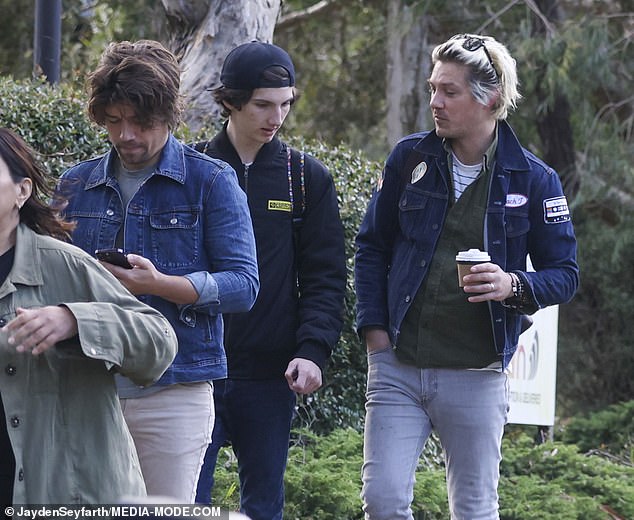 The three brothers, Taylor, 39, Isaac, 41, and Zac, 37, were seen arriving to KIIS FM’s studios for an interview amid their Australian tour 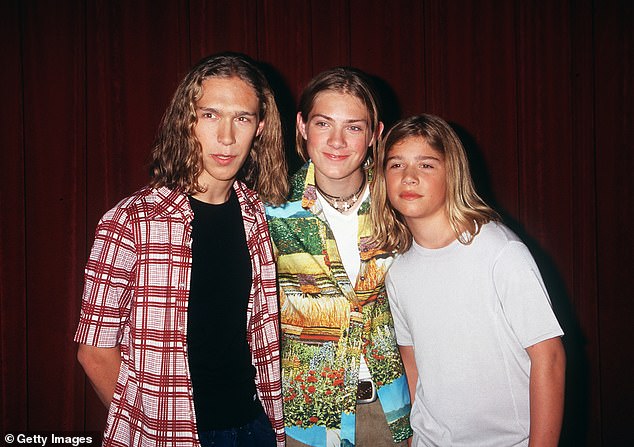 Hanson are best known for their 1997 hit song MMMBop (pictured in 2000)  Pictured left to right Isaac, Taylor and Zac

He also made a style statement in light jeans, a green buttoned shirt and a denim jacket as he prepared for his interview.

Older brother Issac has a sleek quiff and looked dapper in black pants, a matching coloured shirt and blazer. 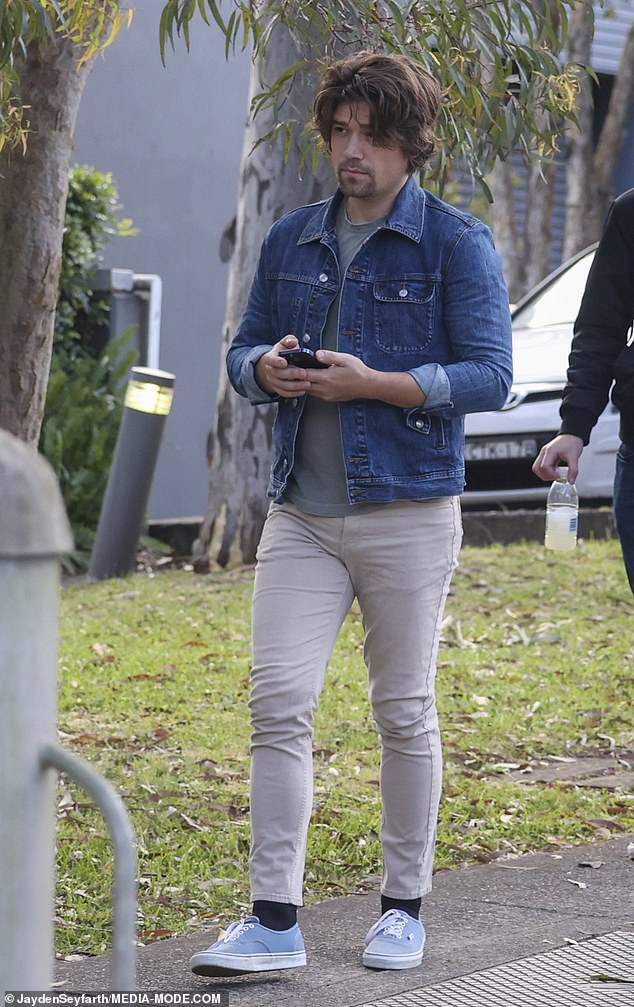 Zac, 37, sported a scruffy beard and a shaggy hairstyle. He wore an edgy ensemble of tight beige trousers, a denim jacket and T-shirt as he walked alongside his brothers 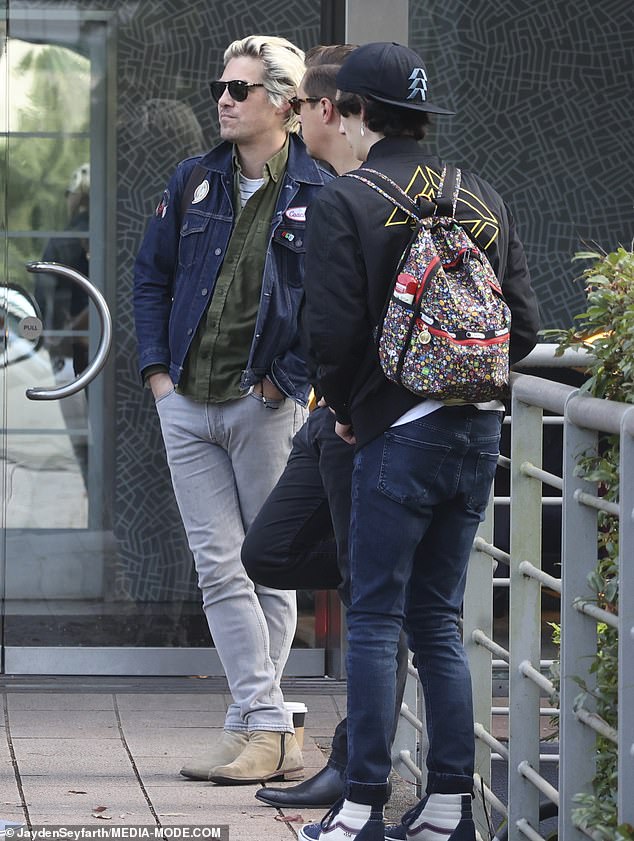 The band are set to perform in Adelaide on Saturday before travelling to Brisbane, Melbourne and then New Zealand.

Hanson are best known for their 1997 hit song MMMBop. 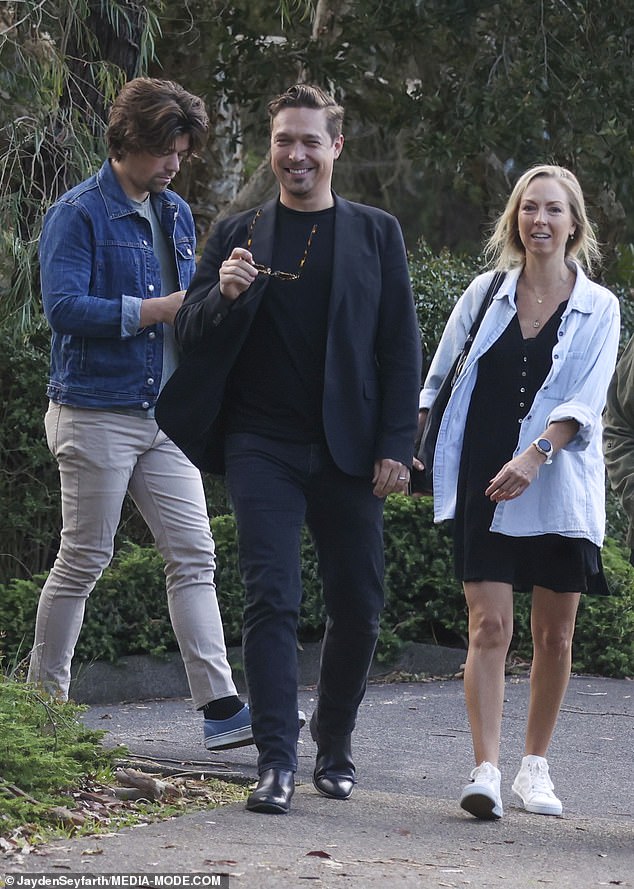 Older brother Issac has a sleek quiff and looked dapper in black pants, a matching coloured shirt and blazer 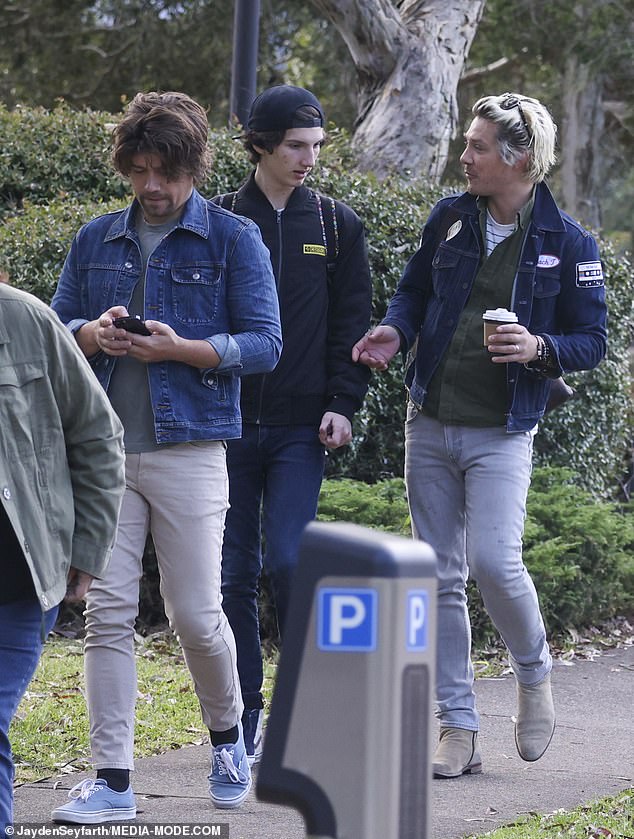 They are a multi-platinum three-time Grammy-nominated band, that was formed in 1992 and have garnered a string of consecutive top 40 singles, seven studio albums, two Christmas albums, and five live releases.

The trio are originally from a large family of six children – four boys and two girls.

The brothers are all married and between them they have a whopping 15 children. 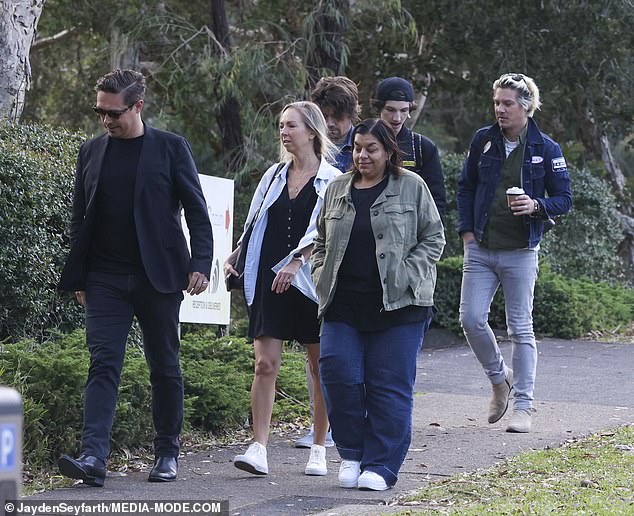 The band are set to perform in Adelaide on Saturday before travelling to Brisbane, Melbourne and then New Zealand 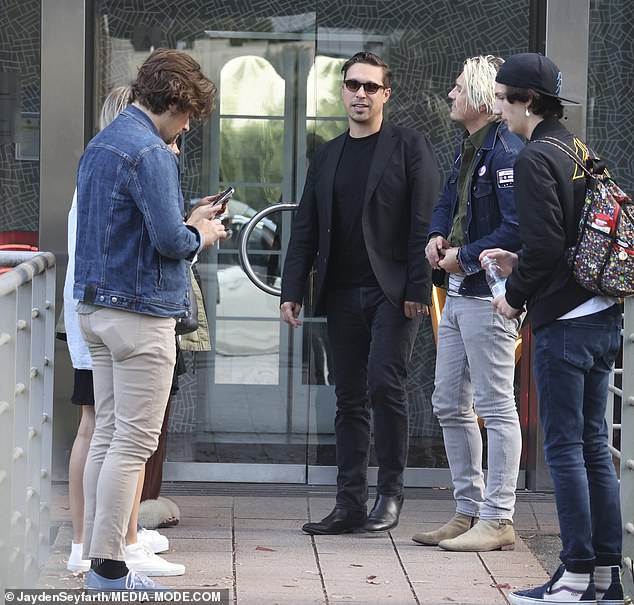 They are a multi-platinum three-time Grammy-nominated band, that was formed in 1992 and have garnered a string of consecutive top 40 singles, seven studio albums, two Christmas albums, and five live releases

END_OF_DOCUMENT_TOKEN_TO_BE_REPLACED 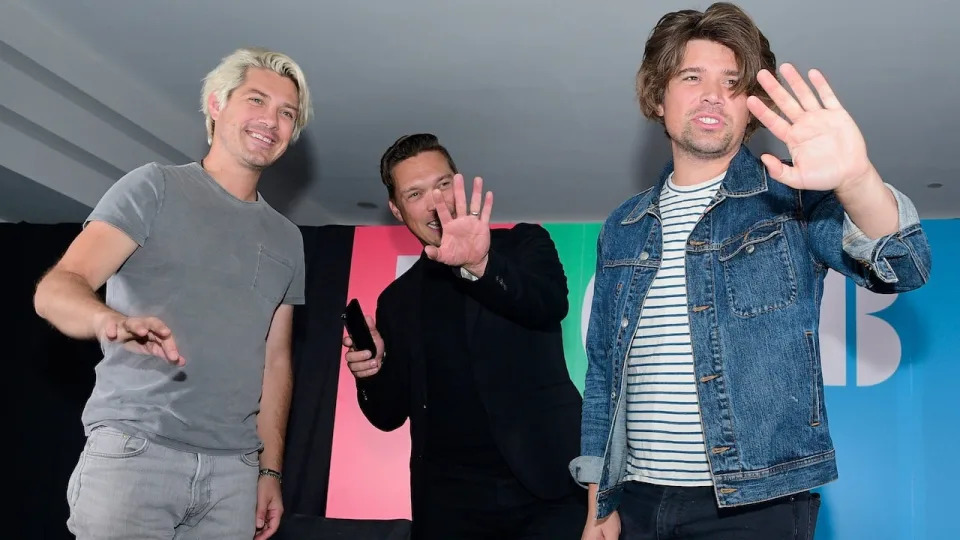 Brothers Taylor, Isaac and Zac Hanson have been working together as Hanson since 1992. Guitarist Isaac Hanson, the eldest sibling, was 12 years old at the time, while Zac, the drummer and youngest sibling, was six. Taylor, the band’s unofficial front person, was nine years old.

By the time they released their major label debut, Middle of Nowhere, in 1997, age was not a hindrance. Despite Hanson’s relative seclusion in the bible belt city of Tulsa, Oklahoma, the siblings’ canny pop originals, such as ‘MMMBop’ and ‘Where’s the Love?’, fast-tracked them to international pop-stardom.

They’ve continued to make music ever since, and in May 2022 Hanson released their 11th studio album, RED GREEN BLUE. However, the Hanson brothers have spent much of their career living in the shadows of their original breakout moment. They’re not in denial of this fact, however, and continue to hold songs such as ‘MMMBop’ and ‘Weird’ (another Middle of Nowhere single) in high esteem.

Hanson got back on the road this year in honour of 30th anniversary. Ahead of the tour’s Australian leg, all three Hansons jumped on Zoom to speak to Music Feeds about their auspicious past and their prevailing outlook.

Music Feeds: Congratulations on 30 years. Zac, you were only six 30 years ago.

Zac Hanson: I was six-and-a-half.

MF: Sorry, six-and-a-half – that’s very important at that age. But you’ve essentially spent your whole life as a member of Hanson. Have you ever questioned whether this is really what you wanted to do? Does it feel like you had no other choice?

Zac: I jokingly say I joined the band at 18. So, there’s definitely been moments. It’s an interesting thing to examine because I wouldn’t say that I was forced into it, but we started the band at a point when… you don’t make conscious choices in the same way when you’re six years old.

Thankfully, it’s been a great ride. I think the key for us has been the ability to evolve, the ability to see that people’s needs change over decades and who they are and what they want changes. To stay being a band, you have to meet people where they are and not say, “Well, we decided to do this when you were six, so it’s all going to be exactly the way it was when you were six.”

There’s a lot of self-examination. If you listen to the lyrics in our songs, you see there’s certainly struggles and points when you say, “Who am I? Am I this thing? Or is this thing what I do?”

MF: So, you must’ve been 11 – or 11-and-a-half – when ‘MMMBop’ came out – and all three of you were really young. For you, Isaac, at 16, when Middle of Nowhere came out, were you concerned about whether the music Hanson was making was cool or fashionable?

Isaac Hanson: I think more than anything, not so much whether it was cool or not, any frustration I ever had was just a weird sensation that when we were younger, it seemed like people wanted to dismiss us as being some version of contrived or disingenuous or something to that effect. And I don’t think that ever existed in our music.

‘MMMBop’, as poppy and as catchy as it is, really makes a concerted effort to talk about things that are genuinely almost morbid or excessively contemplative. And you have songs like ‘Weird’ and ‘Where’s the Love?’ on that first record that are addressing very real, genuine thoughts we’ve had through our lives.

MF: How was it for you Taylor, getting that sort of success as a 14 year old?

Taylor Hanson: It was challenging. It was definitely a frustration to not be able to say, “Hey, just listen to the music.” But it goes with the territory. We got a jumpstart and there’s of course this double-edged sword of people who look at you and they go, this can’t be real, this can’t be authentic, and so you carry that burden.

But you also have this incredible leap forward, where you’ve now forged this deep connection with fans. We have bands that are our peers that are guys that say, “I saw you and I was like, ‘What the heck – I can be in a band?’” And that’s pretty phenomenal.

It also means you have to stay diligent. It strains the brain, it puts a lot of pressure on you. We’re not sane, but we’re manageably insane. Somebody asked me yesterday, “How do you stay sane?” And I said, “No, no, no – you start insane, and that way you can’t ever lose it.”

MF: You were pigeonholed as a boy band, but the songs on Middle of Nowhere didn’t sound like Backstreet Boys or NSYNC. On RED GREEN BLUE, and on your previous record, Against the World, it doesn’t sound like you’re trying to make mainstream pop music.

Isaac: We’re not chasing Dua Lipa, even though I really do think what she does is actually really cool.

Taylor: We’ve never chased a particular production style. We’re still pushing ourselves, but in a different way. Not in a way of saying, let’s mould ourselves to be what seems like the most popular at the moment.

Isaac: Although, a Charlie Puth collab would be pretty fun.

Taylor: But even that we would probably be bending him to do some more chord changes – even though Charlie Puth is really good.

Zac: Something that is both a strength and a burden about Hanson is we’ve never really sounded like anybody or tried to sound like anybody. Even Middle of Nowhere, which was sort of on the front end of a lot of synthesised pop music, particularly in the US, really doesn’t sound like those other records.

Zac: It sounds closer to Black Grape and Beck, Odelay, than it does Spice Girls or the Backstreet Boys. And we continue to… I would say we’re not particularly influenced by the style of the day but by the whim of the moment; by our own particular form of inspiration. 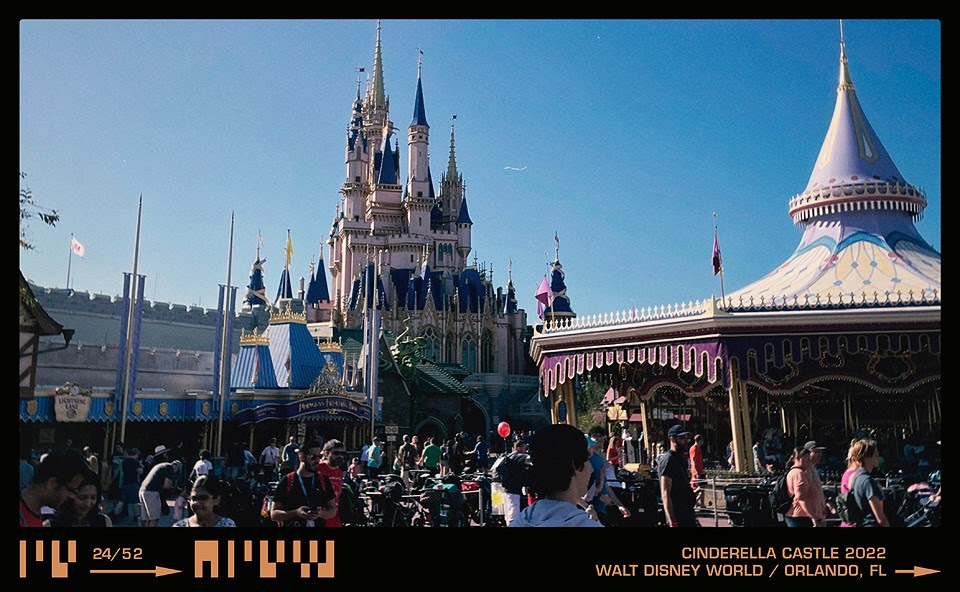 WEEKLY PIC
This week we felt the magic with our return to the Epcot Food And Wine Festival at Walt Disney World. It was amazing to return and see so many happy faces celebrating in the most magical place on earth.

END_OF_DOCUMENT_TOKEN_TO_BE_REPLACED 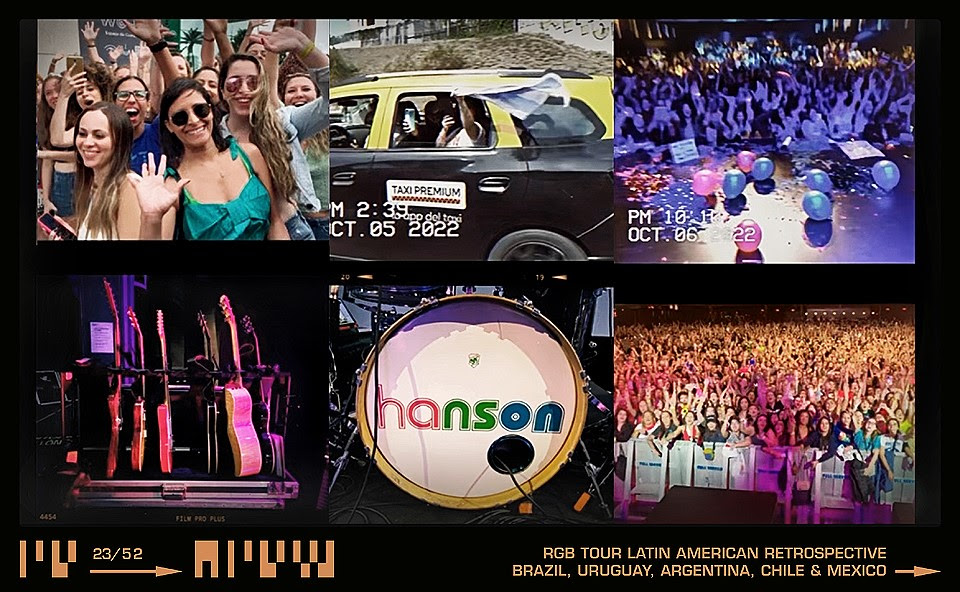 WEEKLY PIC
The Latin American leg of our RGB Tour is now complete. It was a total highlight of the year and we can’t wait to return.