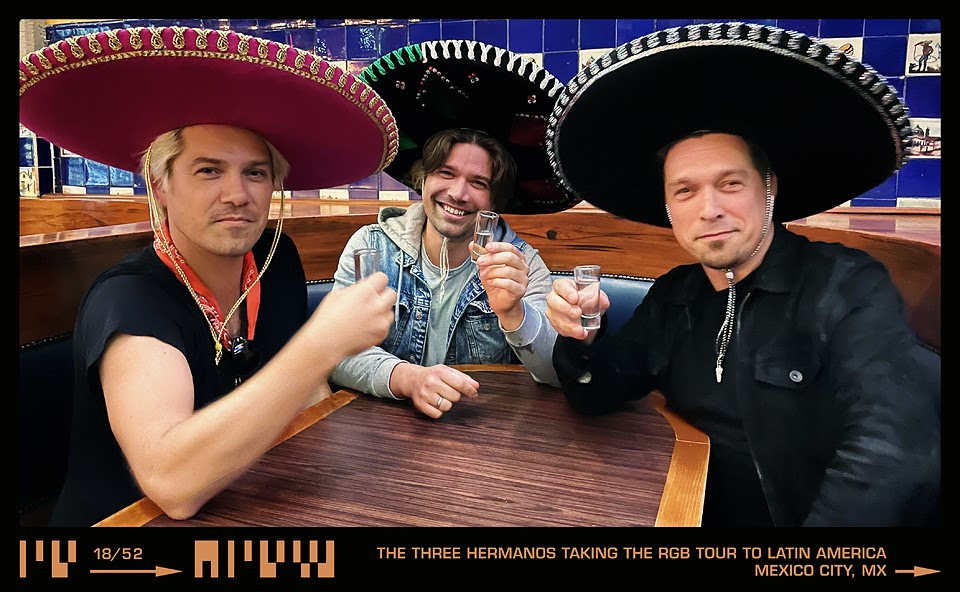 WEEKLY PIC
We’re thrilled to be in Mexico to kick off the Latin American leg of the RGB World Tour. We did it all the way, with sombreros and tequila shots. ¡Salud!

MESSAGE FROM THE BAND
After a week at home, we are back at it again heading down to Mexico City today before our first Latin American show on Sunday. We have never played this many shows in Latin America on one tour, but if this was the new normal none of us would be complaining.

So far this tour has been an incredible test of endurance, mixing the above average challenges of a concert tour with a host of unexpected micro disasters. We have been fighting broken gear, border delays, broken trailers, and four bus fender benders and a genius tour bus vs semi wreck! It has been taking a heavy toll. Even though we will be doing a great deal of travel between now and the end of November, we are all hoping our travel woes are behind us. So cheers to no more surprises, to good food, soft beds, smooth flights, great crowds, and a whole lot of music!

RGB TOUR HEADS TO MEXICO!
he RED GREEN BLUE WORLD TOUR started in Europe in June, the US and Canada from July-September, and and now it will bring HANSON to Latin America in September and October and Australia & New Zealand in November. The band’s first major tour since their String Theory album & tour in 2018/2019, fans will be in store for a tour which not only features the premiere of 15 songs from the new project but will also be the first tour to include live performances of 2020’s Against The World as well as career spanning set lists of fan favorites.

LIVE FROM BTTI
Member Exclusive: Starting this week, we are looking back at BTTI 2022 and sharing videos from some of the concerts and getting excited to go back in 2023. Members, be sure to watch Get Up and Go and Sunny Day, available right now on Hanson.net.