Hanson’s appearance leaves This Morning viewers stunned ‘Not expecting that’ 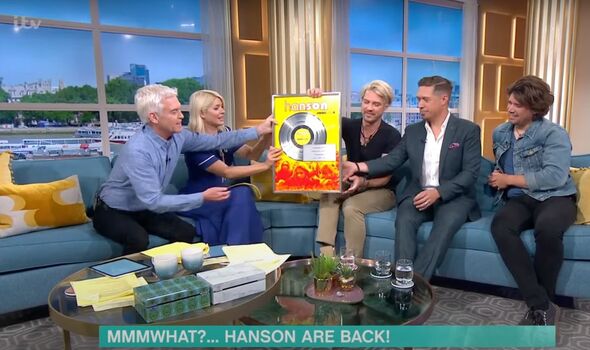 HANSON transported This Morning viewers to the 1990s when they made a rare appearance together in the UK to tease new songs and shocked onlookers with their mature look.

This Morning host Holly Willoughby felt like a “teenager” again as she and co-host Phillip Schofield were joined by the band Hanson. The three brothers, Isaac, Taylor and Zac, shot to fame in the 1990s when they were all young teenagers with their most memorable song MMMBop. Now ranging from 36 to 41-year-olds, the American musicians appeared on the ITV show to promote their new music while also celebrating their careers. Shedding their once iconic long shoulder length blonde flowing hair, viewers of the morning show were distracted by how they had aged.

Welcoming the trio to the show, Phillip said: “Get ready to feel just that little bit older. Can you believe it has been 25 years, quarter of a century, since Hanson released this smash hit song…”

Holly let out a shocked: “No, I can’t” as the music video to the chart-topping song MMMBop played.

After the clip aired, Holly jabbed: “There is no better way to make you feel old is there than when you go ‘That was 25 years ago.'”

It wasn’t just Holly and Phillip who felt old as the nostalgic song played.

Not believing his eyes, @SteveB2Notts commented: “This isn’t Hanson – what have you done with the real Hanson boys? #ThisMorning.”

@JoviGirl_1980 jested: “That one with the suit looks like he’s just popped out of the office for lunch #Hanson #ThisMorning.”

Confusion poured in as @ResidentJobber asked: “What have you done with the real Hanson? They can’t be that old now, surely #ThisMorning.”

There were some 1990s music fans watching from home who loved seeing the band back on their screen.

@KellyDbells11 stated: “This has made me so happy today! Taking me back to my teens! Love seeing that @hansonmusic are back and clearly better than ever!!”

“Hanson have just performed Mmmbop on This Morning and I swear I am going to CRY because of my childhood,” (sic) @chloesumner_ joked.

Reaching the number one spot in the charts at the time in the UK, Phillip presented the band with a framed copy of their record.