FIFTH OF SEVEN CONSECUTIVE MONTHLY SINGLES FROM NEW STUDIO ALBUM, AGAINST THE WORLD

HANSON release “Stronger”, the fifth single from Against The World, their new project being rolled out throughout 2021 over seven months, one single at a time. Available today on all digital platforms, “Stronger” begins as a quiet waltz with just piano and Taylor’s solitary vocal, yet soon explodes with the band’s impeccable harmonies soaring through one of their finest melodies which calls to mind the influences of artists like Queen. The lyrics look deep within searching for inner strength to get through hard times. The official music video for “Stronger” featuring dramatic performance and lighting amidst an astral backdrop, saw its premiere earlier today alongside the single’s release across all digital platforms.

“Stronger depicts the fight between the overwhelming challenges and despair that surround us each day, and our deeper desire to overcome adversity. The arrangement attempts to frame this message through it’s intimacy, as well as it’s bold layered vocals and guitars. Ultimately the song chronicles the search for strength beyond understanding”, said Taylor Hanson. 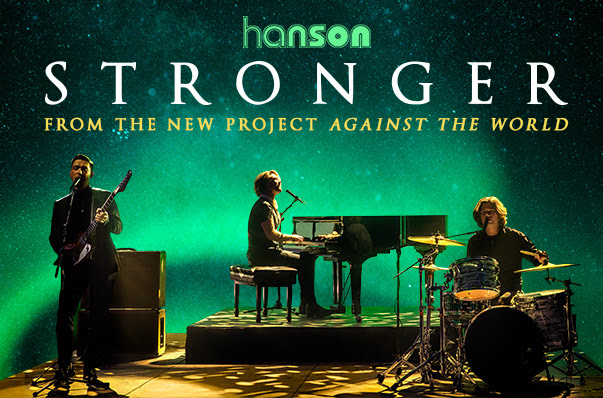 Against The World was announced in May with the release of the debut single and video, “Annalie”, followed by “Don’t Ever Change” in June, “Only Love” in July, and title track “Against The World” in August. The project will continue to usher in a stream of new content including music videos for each of the seven tracks and a summer concert series, offering both livestream and limited in-person tickets. Full schedule below.

The concert series began in July and is running through October at the legendary Cain’s Ballroom in the band’s hometown of Tulsa, OK. Along with the live debut of the latest singles from Against The World, each show will be unique, highlighting different eras of the band’s career. The concerts will also serve as a primer for HANSON’s 2022 world tour, which will go on sale this fall.

The songs for Against The World were recorded at the legendary FAME studios in Muscle Shoals, AL, and bring together a series of new sounds that build on the band’s history. The project is deeply rooted in American soul and rock ‘n’ roll, as well as HANSON’s longevity as songwriters and performers who have continued to mine their origins while propelling their music forward.