HANSON: Against The World 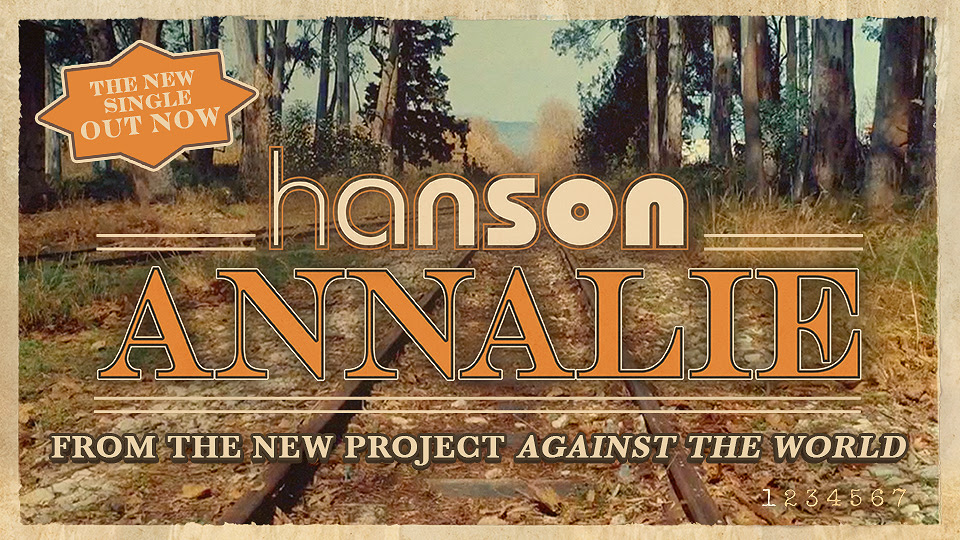 Pop-rock trio HANSON are making 2021 all about new music with their seventh studio release, Against The World, set to premiere in seven consecutive monthly singles throughout 2021. The debut single is “Annalie,” available today on all digital platforms. “Annalie” displays the band’s influences from craftsmen like Paul Simon and the flavors of South African guitar, while the lyrics reflect Memphis and other musical places from which the band draws its inspiration. The project will usher in a stream of new content including music videos for each of the seven tracks and a summer concert series, offering both livestream and limited in-person tickets. Full schedule below.

“Annalie welcomes people into this music with an uplifting spirit while highlighting much deeper meaning in the lyrics and story, which is a call out for grace amidst the journey of life. We felt like it was a great song to begin this epic journey,” said Zac Hanson.

Over the next few months, fans can anticipate tracks across the spectrum of pop and rock, from the power-pop of “Don’t Ever Change,” featuring Rock & Roll Hall of Famer Rick Nielsen of Cheap Trick on lead guitar, to “Fearless” which tips its hat to the symphonic work of the band’s previous project String Theory.

“The common thread in these diverse songs is the perspective that many of them echo. They all reflect on seeking a way through challenges in different ways. That theme, and the camaraderie we’ve felt as a band and with our audience helped inspire the title Against The World,” said Taylor Hanson.

“Against The World is all about striving to be the best you can be, forging a path you believe in. No one else knows what you are capable of but you, and you define your place in the world,” added Isaac Hanson.

Alongside the release of music throughout 2021, the concert series will take place from July-October at the legendary Cain’s Ballroom in the band’s hometown of Tulsa, OK. Along with the live debut of the latest single from Against The World, each show will be unique, highlighting different eras of the band’s career. The concerts will also serve as a primer for HANSON’s 2022 world tour, which will go on sale this fall.

“It’s exciting to know we will be unfolding this project all year and we’re looking forward to bringing these songs and more to fans around the world in 2022,” said Taylor Hanson.

The new project was recorded at the legendary FAME studios in Muscle Shoals, AL, and brings together a series of new sounds. The album builds on the band’s history deeply rooted in American soul and rock ‘n’ roll, and their longevity as songwriters and performers who have continued to mine their origins while propelling their music forward.