5 things to know about Hanson before their MGM Springfield concert 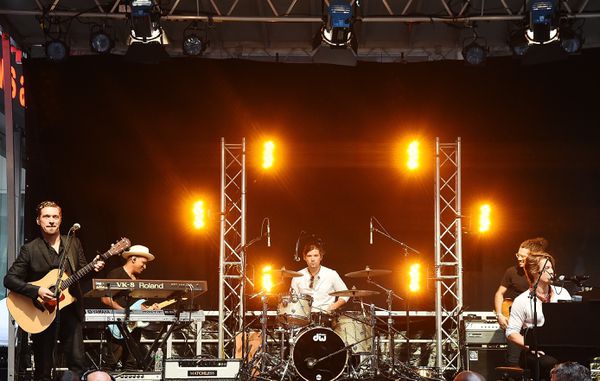 Hanson will perform an outdoor show at the Plaza at MGM Springfield on Saturday, June 8, at 8 p.m. The show is already sold out. (Photo by Nicholas Hunt/Getty Images)

If you’ve listened to the radio or watched MTV between 1997 and now, you’ve heard Hanson’s “MMMBop” at least once.

Beneath the surface, however, lies a trio that’s more than 25 years, 11 albums — and one craft brewery — into its career, despite the fact that none of its members have reached 40 years old.

Hanson will perform before a sold out crowd of 1,450 at the Plaza at MGM Springfield on Saturday, June 8 at 8 p.m.

For those heading to the show, here are a few things you should know:

Hanson isn’t quite a “one hit wonder.”

Sure, most people know the trio for 1997′s ridiculously catchy “MMMBop” — and for good reason. The hit single took the world by storm upon its release, reaching No. 1 in 27 different countries and receiving praise from VH1, Rolling Stone and the Village Voice as one of the top songs of the decade. Fast-forward two decades, and the residual effect of the song’s popularity is still on display, with concertgoers too young to see the band live in 1997 now possessing the disposable income necessary to relive their childhood.

But Taylor, Isaac and Zac’s recording career didn’t start – or end – with the hit song. By time the year 2000 rolled around, the brothers’ sound veered away from bubblegum pop and toward stadium rock with “This Time Around,” which while not a smash hit, has still sold over a million copies. The band has released a total of eleven albums, the most recent of which, “String Theory,” was released in 2018 and features orchestral arrangements of the band’s material.

“MMMBop” was recorded before members of the band were even teenagers.

In fact, the song’s initial recording (on appropriately-titled demo album “MMMBop”) dates back to 1996. The recording, while bearing heavy resemblance to the single, features a slowed-down tempo and clocks in at over 5 minutes.

What makes this recording significant? “MMMBop” was initially written and recorded while two-thirds of the band were still pre-teens. Taylor and Zac were born in 1983 and 1985, respectively, while elder brother Isaac was born in 1980 – making him 15 at oldest when the song was recorded.

While the late 1990s were inundated with child stars breaking into the music industry, this feat is notable for Zac Hanson in particular: at 12 years old, Zac is the youngest songwriter nominated for a Grammy award and fourth-youngest nominee of all time.

Unlike many other child stars, Hanson wrote their own songs.

The late 1990s had their share of memorable teen pop acts. There were Britney and Xtina. N’Sync and the Backstreet Boys.

But behind every Britney exists a Max Martin. Behind every Backstreet Boys exists a Lou Pearlman. Responsible for many of the aforementioned acts’ biggest songs, Martin currently sits behind Paul McCartney and John Lennon as the songwriter with the third-most No. 1 singles on Billboard charts. Pearlman, while initially rising to fame for launching the careers of the aforementioned boy bands, would eventually fall from grace due to aggressive and fraudulent business practices.

Hanson, on the other hand, has spent the bulk of their career doing the exact opposite. For better or worse, the trio have always prided themselves on writing their own material. In fact, demo album “Boomerang” — recorded before Zac Hanson’s age reached double-digits — featured primarily original material.

Unlike many other child stars, Hanson avoided controversy.

From Jodie Foster, to Macaulay Culkin, to the likes of Lindsay Lohan or Amanda Bynes, child actors, actresses and musicians oftentimes experience significant difficulties as they deal with fame – and public scrutiny – at such a young age. However, this was not the case with the members of Hanson.

Instead, by time its members reached an age old enough to drive, the members of Hanson had already gained a reputation for their philanthropy. All proceeds from 2006’s “Great Divide,” recorded with a school choir in Soweto, South Africa, were directed toward AIDS prevention and research efforts. The band would continue this trend over “The Walk Tour,” using their fame to raise awareness about poverty and AIDS in Africa.

The Hanson Brothers Beer Co. exists – and it’s exactly what you think it is.

Based out of Tulsa, the Hanson Brothers Beer Co. was founded in 2013 and currently offers a half-dozen different beers — all of which pack a punch.

While the company’s website makes little mention of the band or its members, a look at its beer list reveals that its flagship brew, “MMMHops,” was awarded a gold medal in the 2013 World Beer Championships.