How Hanson Ended Up Naming Their First Beer ‘Mmmhops’

Courtesy of the band

When Hanson released its Middle of Nowhere album in 1996, the family band became virtually inescapable. First single “MMMBop” was everywhere, while follow-up singles “Where’s The Love,” “Weird,” “I Will Come to You,” and “Thinking of You” also helped led Nowhere to sell more than 10 million copies worldwide. Fast-forward two decades and Hanson — brothers Taylor, Zac, and Isaac still collaborate — is headlining concerts at sold-out venues around the world, while releasing a new studio album every few years. The trio is currently on the road supporting their second Christmas full-length album, the recently-released Finally, It’s Christmas.

Hanson made headlines again a few years back when the brothers launched the Hanson Brothers Beer Company and released its first beer, obviously named Mmmhops. Proving their beer business is not a one-note venture, additional varieties have since come out, including some launched at their annual Tulsa, Oklahoma, beer-and-music festival, Hop Jam Beer and Music Festival.

The Daily Meal: How did you first get into craft beer?
Isaac Hanson: I think beer for us is much like music; you start off being a fan. For us touring is a huge part of that as well because as young pre-drinking age musicians, beer wasn’t exactly first on the list. But obviously, as the years go on, especially our independent years – 2003 to 2006 – it started to be really a regular time of experimenting. We tred beers in local cities at these are small breweries, not widely distributed. We wanted to try some local flavors, which you are trying to do whenever you show up in cities.

With the explosion of microbreweries around the country, especially by ’05, ’06, it really started to be even more prolific. It became a thing of, “Okay, well, let us look for things that are interesting.” We started doing that pretty regularly. It became very clear that beer, much like food, has a lot of variety and a lot of very interesting things to experience.

That led to conversations with a friend of ours, who was a roadie for us and a microbrewer as well. He would talk about his favorite beers, and that got us even more into it. He would even brew some of his own stuff and bring it on the road. Next thing you know we also kind of have the idea of what would it take to make your own beer and how would you go about doing that and so on and so forth. One thing leads to another and you start talking to brewers about flavor profiles and creating a beer of your own. 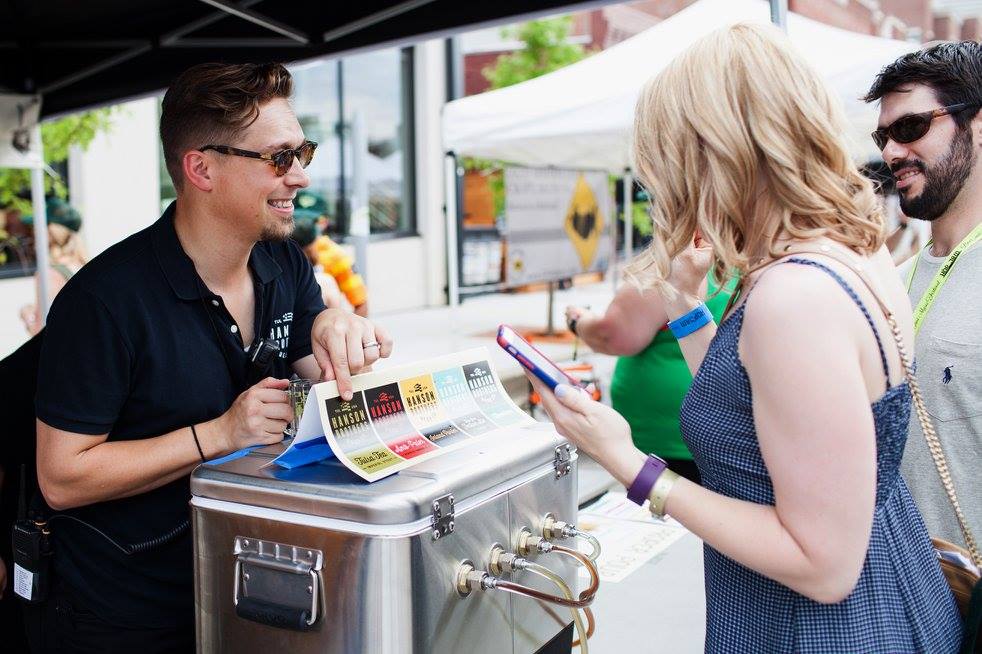 Isaac Hanson slings his suds during the Hop Jam music festival in 2016.

The Mmmhops name obviously stuck out for a lot of people. I was wondering if when you came up with that name, somebody just threw it out at you and somebody went, “yeah right,” or that just was the name all along.
Actually, it is funny. It definitely started off that way because what happened was in classic kind of touring form. We were all sitting in the front lounge of the bus, laughing about things that have gone on in the day and just decompressing after a show. We are talking about you know beers that we could make. I think get the credit to some degree, whether it is a good thing or not, of being the first one to say out loud, “If we had a pilsner or an IPA, we need to call it Mmmhops.”

Everyone did like smirk and laugh and go, “That is ridiculous.” And then it became an ongoing comment and joke that became a thing. “Wait a second, that is actually not a bad idea, It is a little bit like the elephant in the room in a really fun way.” We said to ourselves, “If we do this, it’s a good idea that is actually really fun.” It took shape in a way that we didn’t originally expect. We originally planned to just do a limited run and maybe release it to our fan club or something.

We mentioned it casually during [an interview] that we were doing it. We were doing a kind of lecture about our career and lives for a student body organization at Oxford University in England. [It was about] how we see the music business, how we’ve negotiated through a very tumultuous time, and the business as a whole. Toward the end our brother Zac mentioned that we are entertaining the idea of making our own beer, and if we do a pilsner or an IPA we will call it Mmmhops. That rung everyone’s bells and the thing that we thought we would make a little bit smaller just to see how it went became a realization. We should really consider this, take it a bit more seriously, and look into the idea of investing in a business. And so that is the path we have taken, it has been a slow and steady process like it is for pretty much everybody. But we’ve taken it very seriously and really care about the long-term growth and quality of the beer that we make.

Is there hope of making additional varieties?
There actually are additional varieties. Mmmhops has been the one that has stuck out because it has been commented on the most for obvious reasons. But we also do Hop Jam Festival Ale, which was debuted at our Hop Jam Beer & Music Festival, which has been going out for four years. It is a spiced farmhouse ale and is really, really lovely. It has some orange and coriander in there.

And then we’ve got a stout that we have called Tulsa Tea, which is kind of playing off of the fact that Oklahoma is known for its petroleum products and a play on Texas Tea. Then we have also have an amber ale called Redland that we also produced for the festival and is only on draft. The two that are in production right now are the farmhouse ale and the pale ale, which is Mmmhops.

This interview has been edited for length and clarity.