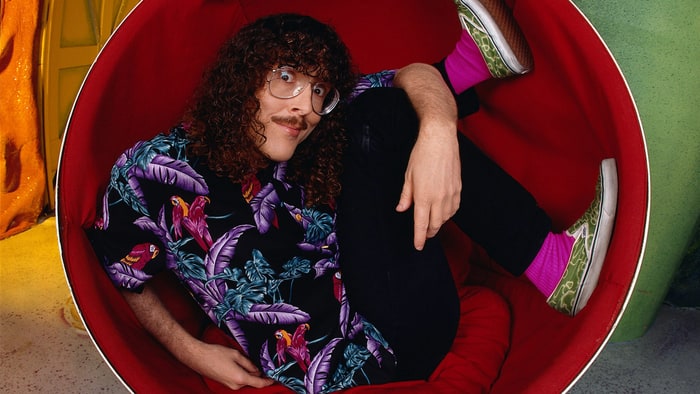 The Weird Al Show debuted on CBS on September 13, 1997 as part of their Saturday morning lineup. Each episode began with the all important “today’s lesson” before viewers were invited into Yankovic’s underground lair that he shared with Harvey the Wonder Hamster. Special guests like Patton Oswalt and Gilbert Gottfried might stop in; musical guests like Hanson, Barenaked Ladies and All-4-One would occasionally drop by to perform songs; and you’d meet irreverent characters like a “gal sp”” who’d change wigs in each episode and a psychic that could only predict the present.

Al’s Saturday Morning Schoolhouse Rocks
Yankovic: The network was very set on having acts that not only appealed to young people, but acts that were very young themselves. Our biggest coup of the whole series was being able to get Hanson, because at that time, they were at the absolute peak of their fame. It was a major, major booking. I thought everyone would be thrilled, but from what I remember, we got zero publicity on that. We had the biggest kid act in the world on our show and no one from the network said a peep.

Reed: Before I first heard “MMMBop,” which isn’t what they sang on the show, I thought they were a Jackson 5 homage/rip off. That’s such a great song. I remember them doing the sound check and sounding really great. I loved those guys.

Taylor Hanson [Lead Singer, Hanson]: All of us were already fans. Growing up in the Eighties and early Nineties, we watched the “Fat” video countless times. We loved doing the show. For three teenage guys, we appreciated his propensity for fart jokes and off-the-cuff humor. We were right at home with him.

Yankovic: When they got the booking, they probably thought they’d signed up for something else – like Al TV, my MTV show. When they got to the set, they were like, “Oh, this isn’t what we thought it was going to be.” But they were totally professional. We’ve kept in contact over the years. I directed one of their videos; Taylor’s appeared on one of my albums. We’ve gone on to become very good friends.

Reed: I do recall being stressed during the shoot because Zac, the drummer, kept changing his hair during between takes. Looking back 20 years later, there’s a part of me that’s like, “I can’t believe there was a point in my life where I was sweating the continuity of the Hanson drummer’s hair.”

Hanson: The song we played on the show is called “Where’s the Love.” We would joke that Al should do a version of called “Where’s the Glove,” dedicated to O.J. Simpson. It would have been timely! We floated that around just for fun. [Pause] Maybe not everyone would agree with that concept.

Parker: I must have looked good in my costume, because one of the boys from Hanson tried to take me on a date. I was like, “How old are you?” I think he said he was like 16 or 17. I don’t know how the old the hell he was, but he was serious!

[Full article at the source]