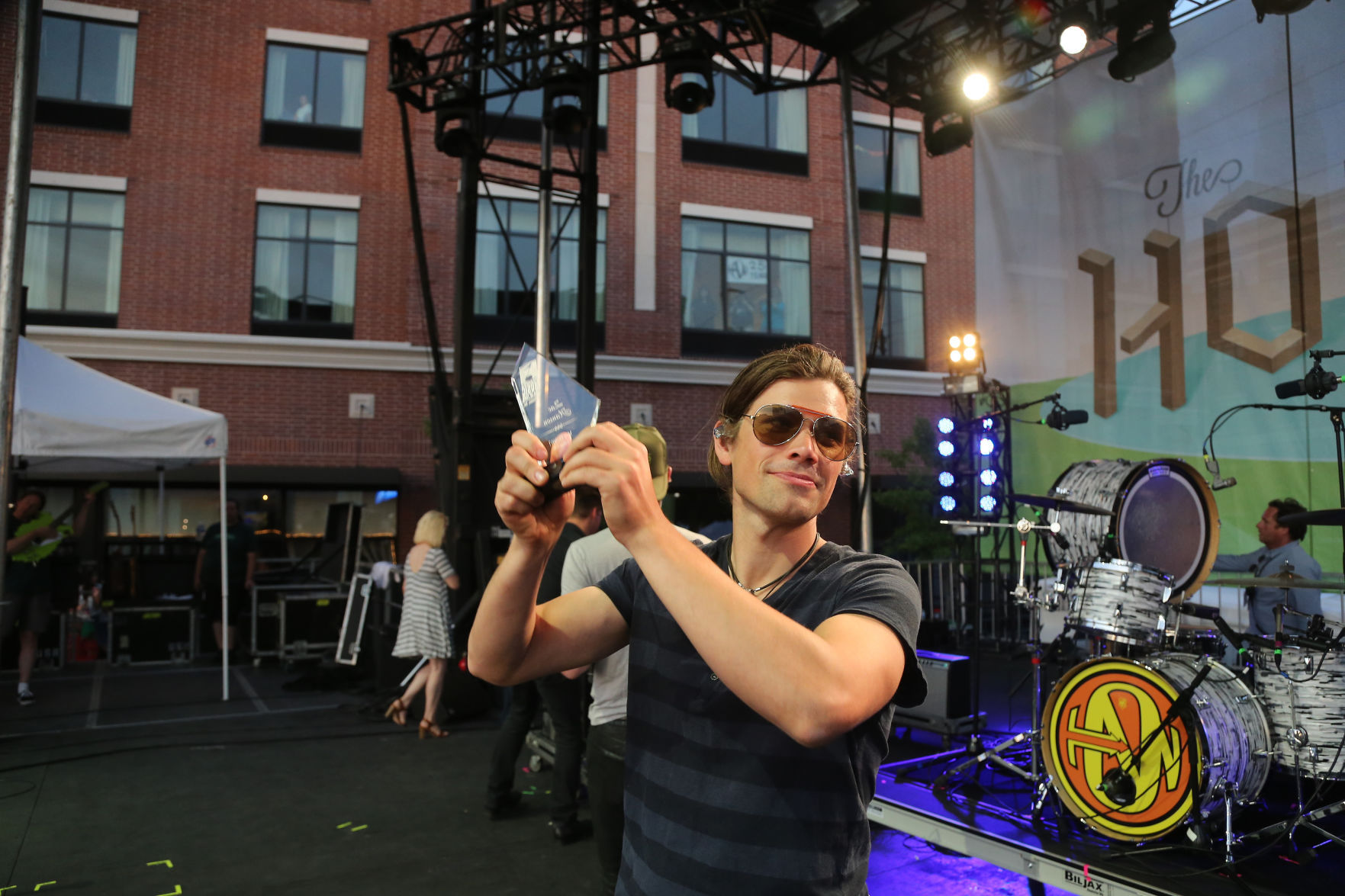 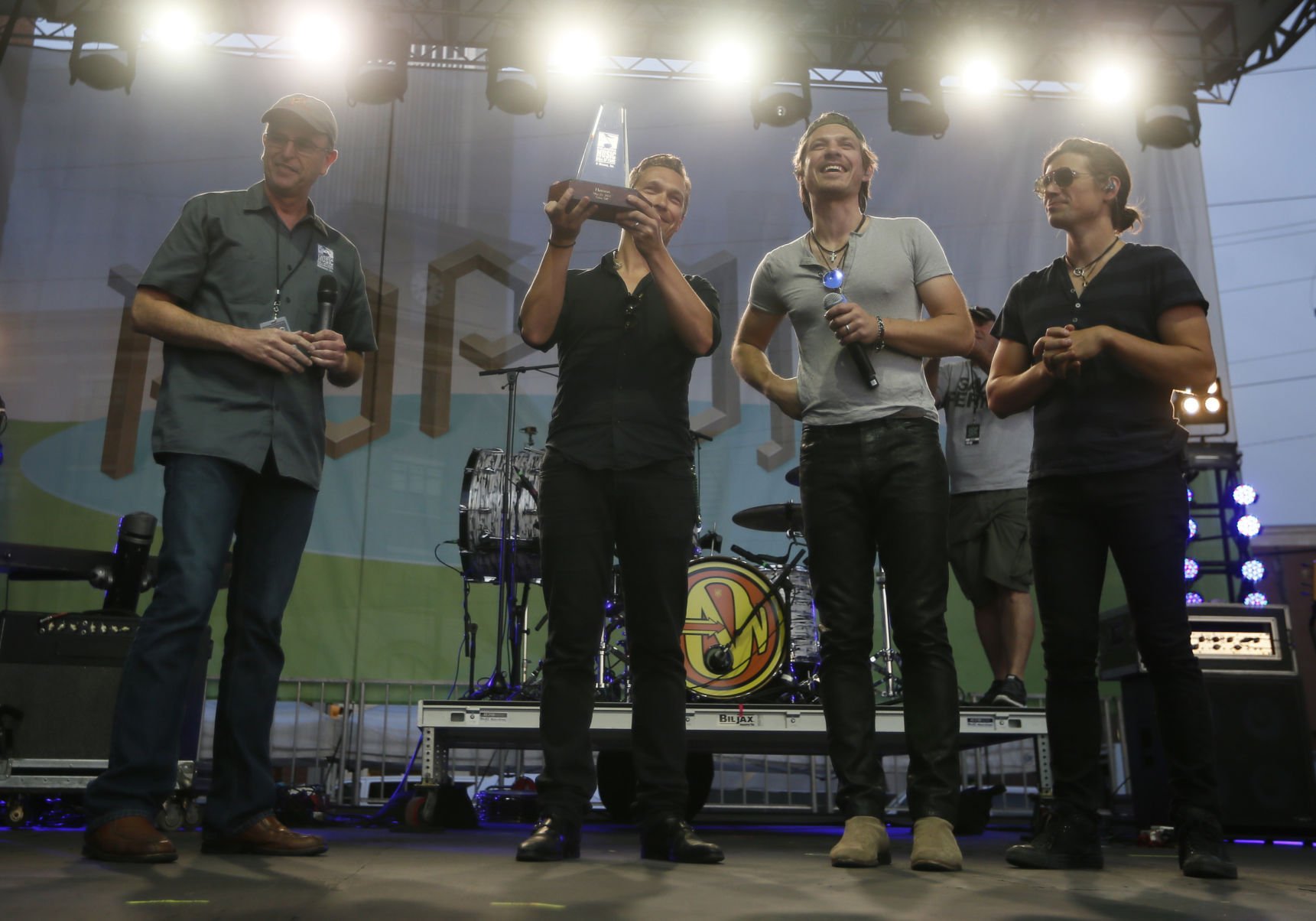 What better time to honor the festival’s founders?

The Hop Jam was created by Isaac, Taylor and Zac Hanson, who, of course, perform together as Hanson.

Hanson was the headlining act Sunday at The Hop Jam. After Hanson took the stage amid screams, the group was joined by Jim Blair, executive director of the Oklahoma Music Hall of Fame.

“Thank you so much for this honor,” Taylor Hanson said, adding that it’s great to join an “incredible” group of inductees who were honored in years past.

Hanson was selected a long time ago, and the Oklahoma Music Hall of Fame has been in contact with the band’s representation for “quite some time” in trying to determine when schedules might align for induction, according to Blair.

“And we thought, well, let’s take the opportunity to come to Hop Jam, to their event, and actually present the induction then,” he said. “And then at some point maybe we can talk them into coming and doing something special … (at a) different time of year.”

Blair said Hanson’s induction is probably long overdue, “but Oklahoma is so loaded with talent it’s just hard to get them all, and you don’t want to water it down. Our mission is to promote, preserve and honor.”

Hanson, founded 25 years ago, graduated from Tulsa band to international phenomenon in 1997 with the release of its Grammy-nominated album, “Middle of Nowhere,” which included the smash single “Mmmbop.”

“It was huge,” Blair said. “They were so young, and you saw them everywhere. They were all over the media back then, all over the world. So many times those bands kind of fade out and go into obscurity, but these guys, we are pretty proud of them. You see that a lot with the Oklahomans. They are hard workers. They have got a good work ethic, and they really developed something in Tulsa with Hop Jam and their brewery. And it’s thrilling for us to get to do it on the 20th anniversary (of ‘Middle of Nowhere.’). It’s almost perfect the way the timing worked out.”

Hanson, which operates an independent label (3CG Records) out of the Brady Arts District, has released five additional albums with sales of more than 16 million to date. In 2013, Hanson founded Hanson Brothers Beer Co., and, one year later, Hanson launched The Hop Jam. The event brings artists and brewers from all over the world to the Brady Arts District.

Hanson used the most recent Hop Jam to kick off a “Middle of Nowhere” 25th anniversary tour. Next stop: June 1 in Cologne, Germany. Eleven of the first 25 dates are sold out, according to hanson.net.

The Oklahoma Music Hall of Fame will induct other members of the class of 2017 during a June 14 ceremony at Hatbox Field in Muskogee. An induction ceremony and concert will feature performances by many of the honored artists. Inductees include pioneer of Red Dirt music Jimmy LaFave, country music singer and songwriter Carl Belew, musician and actor Rodney Lay, red dirt music torchbearers the Red Dirt Rangers, Grammy Award-winning musician David Teegarden Sr., and singer and harmonica player Jimmy “Junior” Markham.