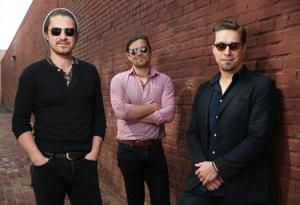 The Hanson brothers, Taylor, Zac and Isaac, apparently are involved in the redevelopment of a Brady Arts District building, proposed to include a brewery, studio, retail and office space, according to Tulsa Development Authority documents. Tulsa World file

The Hanson brothers are apparently involved in the redevelopment of a Brady Arts District building, proposed to include a brewery, studio, retail and office space, according to Tulsa Development Authority documents.

The deal involves multiple privacy stipulations, binding the authority from immediately sharing details of the project despite the use of public funds, according to documents on the authority’s website.

In a redevelopment agreement, the TDA agreed in August to give a low-interest $2 million loan to Mayfield LLC, the listed developer, to go toward purchase of the LA King building property, 320 N. Boston Ave.

A resolution approving the agreement was signed Aug. 4, according to TDA documents.

O.C. Walker, executive director of the TDA, said the development agreement is with Mayfield LLC.

“In essence, what we’re talking about doing is a $2 million loan over six years with 2.5 percent interest,” Walker said. “It’s a really low-interest loan to facilitate development.”

Walker said the details of the project came out of proposals previously heard by the authority, but he directed further questions to Walker Hanson, father of the trio of musical brothers.

The redevelopment agreement stipulates that Walker Hanson is the contact for any inquiries regarding the development.

The group put out a statement in response to questions about the development Thursday.

“We have always been invested in Tulsa, and it continues to be our goal to bring attention and commerce to the city,” the statement says. “We’re excited to further our development efforts. Next year is Hanson’s 25th anniversary, and we look forward to a world tour, releasing new music, and the continued expansion of our beer business.”

Walker Hanson did not return requests for comment, and a person who answered the phone at his provided number said he had no further comment.

An unsigned redevelopment agreement available on the TDA website, apparently the document referenced in an approved August resolution adopting the agreement, has several privacy clauses.

According to the agreement document, TDA is barred from disclosing any information from the developer’s proposal to third parties.

“TDA shall … not disclose any such information to any third party without developer’s prior written consent,” according to the document. “In the event the TDA becomes legally compelled … pursuant to the requirements of the Oklahoma Open Records Act … TDA agrees that prior to such disclosure it will provide the developer with advance written notice and a copy of the documents and information relevant to such legal action so that the developer may seek a protective order … to protect its interests.”

The redevelopment agreement, attached to the approved resolution, references the proposal “presented by the developer to the TDA on March 10, 2016 and March 24, 2016.”

Walker declined to discuss when the proposals were made, offering that the project has “been on several agendas. There’s a good chance it will be on the Oct. 6 agenda,” the date of the group’s next monthly meeting.

However, neither the city’s website nor the development authority’s website lists agendas or minutes for March 10 or March 24.

Walker did not respond to follow-up calls or an email Wednesday afternoon requesting information about the nature of the referenced proposal meetings or whether a quorum of authority members was present. Without a properly posted agenda, a quorum of a board, commission or authority, such as the Tulsa Development Authority, cannot legally meet to discuss public business under the Oklahoma Open Meetings Act.