20 YEARS LATER, HOW A DEMO CD BECAME ONE OF HANSON’S MOST DESIRED COLLECTIBLES 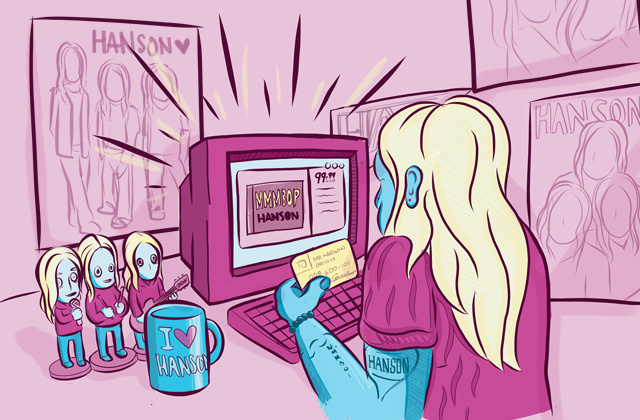 By the summer of 1997, millions of people across the world were singing “MMMBop,” even if no one knew what the hell “MMMBop” even meant. The earworm of a track was unavoidable. It had climbed to the top of Canada’s RPM 100 Hit Tracks listing and the song peaked at number one on weekly charts in the USA, the UK, Australia and Germany among many other countries. But that snappy, harmony-fueled version of “MMMBop,” wasn’t the original. 20 years ago this month, the three fresh-faced boys from Tulsa, Oklahoma self-released MMMBop, a CD and cassette sold only at their own gigs and at regional chains in Oklahoma. On it contains the longer, shuffling original ballad-ish track that clocks in at 5:16 compared to the 4:01 version that pierced the collective subconscious of the western world.

Copies of MMMBop have turned into one of the most in-demand pieces of memorabilia for a band that has no shortage of merchandise opportunities. The CD go for over $170 on Ebay. Hanson is a band that has come full circle: from independent tweens and teens looking for a break, to global mega-poppers to a cult band whose only tour dates listed are part of a “Back to the Island” destination concert in Jamaica that will feature three Hanson concerts plus island games and a tie-dye hosted by the three brothers. “MMMBop” was in many ways the beginning of the band and 20 years later, fans are still shelling out hundreds of dollars for a glimpse of those beginnings.

Upon its release in 1996, Hanson shopped “MMMBop” to any label that would listen. They’d been plugging away in Tulsa, first as an a cappella act that eventually released the independentBoomerang in May, 1995 to no luck at all with labels. With more song-writing experience, they eventually became what keyboardist/singer Taylor Hanson now refers to as a “Garage band” in 1996. Ebay user “melsbb1985,” who is currently selling the record online, told me that she bought the album “from someone who lived in Tulsa, OK.” Tulsa was ground zero for the band’s explosion: they recorded “MMMBop” in a one-car garage in the rural, western end of the city. “It was a lot like making records now, but with a lot less beer,” Hanson says. “The only sense that “MMMBop” was a demo record was that we knew we were ultimately trying to reach or connect with a record label that would want to sign us and promote us and help us take over the world. But we were making it firstly for us and for our local fanbase,” he says.

It’s a fanbase that hasn’t lost any of its fervency either. Consider Jeffrey Alan, who goes byHansonGuyDotCom on Twitter (Though the website was down as of Wednesday). Alan says that MMMBop is “…definitely a huge collector item that most fans would love to have their hands on. Having the pre-fame Boomerang and MMMBop album is what really completes most fans collections.” Alan owns a copy himself, having paid $300 for both Boomerang and MMMBopalbums together. “It took me a while to save up and finally be able to own it, but when I opened the mail and the original MmmBop album was in it, I was elated,” he says. “I felt like I had been waiting since I first heard Hanson in 1997 to own it.” While Alan lauds the different types of merchandise Hanson makes available, he believes that Mercury Records destroyed copies of MMMBop so that the focus would remain on their major label debut, Middle of Nowhere and the version of “MMMBop” many since came to love hate bow down to in the face of its pure pop majesty. 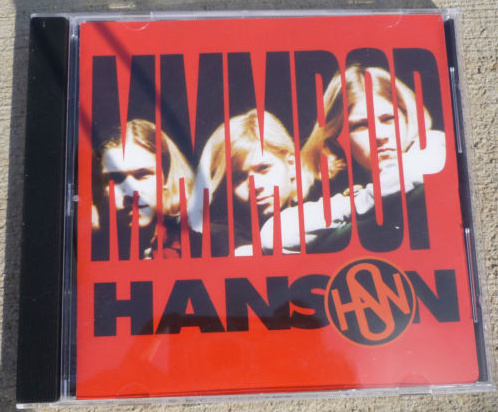 There are just three tracks from MMMBop that made it onto Middle of Nowhere including “With You In Your Dreams” and future single “Where Is the Love?” but it was “MMMBop” that the album was centered upon. The trio met with producers electronic producers the Dust Brothers to consider changes to the original version of the song in the hopes of making it more commercially appealing. Even at a young age, however, they maintained a sense of principles. “We were hesitant to change it because the song is a serious song, especially at the time in life we were at. It’s about realizing you can’t change things, relationships come and go, but that’s life,” says Hanson. In sitting down with the Dust Brothers, the brothers wanted to stress how earnest the song was. “How could we keep that earnestness and incorporate more rhythm?” he recollects. “The earnestness needed to take a lower level of importance to the rhythm. Obviously, the folklore of the song has become that that word, ‘MMMBop’ is a new word. But the verses are the heart of the song.” And it’s on the original, longer and slower version of the song that the verses have a chance to stand out.

Hanson estimates that the band produced and sold no more than “a few thousand copies” of the record, which would in part explain why it’s become such an in-demand collector’s item amongst Hanson fanatics. He admits that when trying to hawk the CD to their fanbase, the young trio would set up shop at the merch table themselves after shows. Eventually, Mercury Records caught on to the commercial possibility within the band and in the spring of 1996, after the release of MMMBopthey were whisked away out of the comfortable confines of Tulsa to Los Angeles to set their course on world domination. Even with a wide realm of possibility, they mourned the death of the short-lived album. “On a local level, we were somewhat disappointed,” Hanson says. “We got signed to Mercury [Records] that summer because of that record. On a local level, we said we were going to push this record hard. And then we got signed so we had to leave and go make another record. So in a way it was an unrealized local product.”

It must be re-stated here that at the time of the release of MMMBop, guitarist Isaac was 15, Taylor was a few days past 13 and drummer Zac was a tiny 10 years of age. Even then, if fans wanted the brothers, that’s who they got. It is that strange personal connection that fans formed not only with the band’s music but the band themselves that has remained at the heart of their cache and also perhaps explains why, 20 years later, the demand for what remains an independent and hastily made album still exists. “Music is inherently very, very personal and how it impacted a lot of people at a specific point in their lives, clearly there is an attachment to the fact that this is an anthology to something that a lot of people had a personal connection to,” says Hanson. “This is the secret, insider, behind-the-curtain look at something that pre-dates what a lot of people have a connection to.”

Browsing through Hanson’s website is like walking through a mega-mall designed with one purpose in mind: extol the Hanson brand as enthusiastically as possible with an array of diverse merchandise, from apparel (Options range from crew neck to v neck and long sleeve to short sleeve) to accessories (Need a Hanson stress ball or the Hansonopoly board game? They have you covered) and also connect fans to the band. Tickets for the Mexicali Fan Club Dinner, a bowling tournament, and a karaoke & dance party are available, as is the aforementioned Back to the Island trip which is, of course, returning for a second year and is already sold out of certain types of packages.

Rare is the band that can build and maintain this type of connection. And it is “MMMBop” that started it all. Hanson says that even amongst the many meetings he has with fans, the CD “doesn’t show up too often” but that doesn’t diminish the importance of it. “To me, what’s cool about that record and that song is that people’s relationship with songs evolve,” he says. “People’s perspective evolves. That’s what’s cool about the memorabilia. It’s their experience that they’re chronicling.”