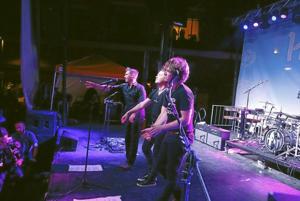 You may not be able to make it to the House of Blues in Chicago for Hanson’s concert, but you can be there in spirit.

Yahoo Live will be streaming the concert for free starting at 7:30 p.m. Thursday. Stream the show on the Live Nation Channel at yahoo.com/live. The concert can also be streamed on the Yahoo Screen app for mobile phones and TV-connected devices like Apple TV, Roku or Xbox.

The show is their second in Chicago this week. Tulsa natives Hanson kicked off their Roots & Rock n’ Roll Tour on Wednesday in Chicago. Each tour stop features two nights of music: The first night featuring iconic cover songs with the second night featuring songs from Hanson’s extensive catalog, including their biggest hits. Tickets are sold as a two-night package.

Unfortunately for Tulsa fans, none of the tour stops are in Tulsa. Ticket information and more info about the shows is at hanson.net