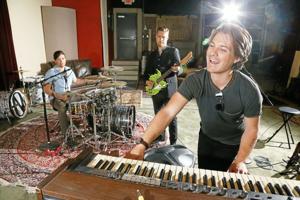 Zac (left), Isaac and Taylor Hanson rehearse before The Hop Jam. Isaac (center) is playing a hop-shaped guitar created at Fab Lab Tulsa to be raffled off during the beer and music festival to raise money for Community Food Bank of Oklahoma.  TOM GILBERT/Tulsa World

Hanson’s 3CG studios on Main Street is surrounded by activity. There’s construction on either side of the red brick building, the sound of the Brady Arts District revitalizing at a breakneck pace.

For the international pop stars and Tulsa natives, they can’t think of a better place to be than right in the middle of it.

“Places are what you make them,” middle brother Taylor Hanson told the Tulsa World in a lengthy interview in their studio. “We decided a long time ago to stay invested here. We could be a part of the good things happening.”

Not only have they stayed invested in Tulsa and the growth of downtown — they were in this studio well before the empty warehouses around them were converted to museums and an empty lot became Guthrie Green — but they also continue to grow their investment. Proof of that will come Sunday when thousands flock to the Brady Arts District for the second Hop Jam beer and music festival.

The event brings a variety of music and beer from across the world, and it’s all free to attend. It shows Hanson’s commitment to be a part of Tulsa’s revitalization, to be a part of the growth so that all parts of the city rise together.

But working and living in Tulsa has also given the brothers a unique view of their work.

After all, a Tulsa stage in May is where they got their start, so it’s fitting that each year at the same time they want to bring the community together to celebrate what got them to where they are now.

And with The Hop Jam, their yearly party in May continues and will keep growing.

“We were well prepared, but underprepared for the level of response,” oldest brother Isaac Hanson said.

So this year, they plan to start the music earlier, pack more music into the time and finish earlier. They also plan to bring more beer. Lots of it.

“It was all Oklahoma beers last time,” Taylor Hanson said. “This year, there’s a huge number of non-Oklahoma beers and special stuff. That’s good because we want people to begin to go ‘OK, I’m going to this, stoke the fire.’ This is an event where we want to be recognized.”

The band will perform to close out the event this year, though they said they do plan to step back at some point. In fact, they said they planned to do that this year but felt like the young festival still needed a show from its hosts.

What they hope to do with the lineup, however, is to make it eclectic and fun. They want people to put The Hop Jam on their schedule every year no matter who is playing or what beer is being poured.

“I think one of the main takeaways is just developing the brand of what The Hop Jam is,” Taylor Hanson said. “All of it together is what makes up what The Hop Jam is. The bands are going to change every time, and the beers will evolve. You’re trying to figure out what’s at the core that is us, that is the identity of the festival. If you step back from the whole, what’s your takeaway. The takeaway I think is authentic and hip.”

The band’s first performance was at Mayfest in 1992. They were very young at the time, singing covers and a few of their own songs.

It would be in 1997 that Hanson became a household name. May of that year saw the release of “Middle of Nowhere,” which included the song “MMMbop.” Soon, they were everywhere and their career had taken off.

Their second album, also released in May, didn’t reach the same level as “Middle of Nowhere” but showed that the band was free to stretch their own creativity, Taylor Hanson said.

Then through the years, that has been a theme of the band’s: They look for a strong melody but take different paths to get there.

That can be seen with their latest work, an EP that will be given only to fan club members as part of the Hanson Day weekend events that go on before The Hop Jam.

“We really tried to challenge ourselves to start off without being a live band and put ourselves in our writing spaces,” Taylor Hanson said. “We started writing with more synthetic sounds. We usually start with a keyboard or guitar, and it kind of influenced our sound. As far as where we are musically, I think we’re really enjoying collaborating and getting the colors of other writers and other musicians.”

In this year’s EP, Hanson previewed a synth-heavy track that’s a departure from their normal pop/rock. But it still has what Hanson fans have come to expect and hope for with a strong chorus and catchy tune.

“Over the years it’s become something where we take a week or two and write and record and give it a name, give it a look and a feel and a creative vision,” drummer and youngest brother Zac Hanson said. “It will be the everything bagel this year.”

Those fan club EPs give the band a chance to explore, as well.

“It allows us to go, ‘We’re going to have fun with this little taster,’” Taylor Hanson said. “You do hear flavors of that. Sometimes you try something and say, ‘Wow, I didn’t know that was going to work out well. We should do that three or four times.’”

They still work on new music, but they’ve slowed their pace since the release of “Anthem” in 2013. In addition to the Hanson fan club EP, they have done more work recently with their line of beer and worked on collaborations with other artists.

“It’s been about trying to give ourselves the adequate time to focus on some other things that we’ve always wanted to do but never given enough focus to,” Isaac Hanson said. “It always became something that is ‘Oh yeah, when we get to it’ as opposed to something we were really aggressively going after.”

Some of their recent collaborators include Blues Traveler and Owl City. Those collaborations have helped the band find new sounds.

They said that though they aren’t specifically working solely on a new album, it is something they do have on the horizon and plan to work on this year.

“We’re working toward a record next year, but we think the right projects are what’s most important,” Taylor Hanson said. “So we’ve tried to curate a situation now where we’re creative and we can time the next releases based on something beyond, ‘Hey, it’s time for another record.’”

And the Hansons said that Tulsa provides them the best place to incubate that as they continue to grow.

Oklahoma musicians have a work ethic and authenticity that makes them stand out, Taylor Hanson said.

“If you look at all the musicians — from Wayne Coyne to Woody Guthrie to Reba McEntire to us to The Gap Band — there’s something about all the Oklahoma artists that is very authentic,” Taylor Hanson said. “Everybody that puts something out, there’s very little posing.”

There’s a heartiness, he said. The pioneer spirit continues in the state’s creativity and work ethic, and it’s more than just music — it’s an inspiration for continued growth.

“The ethos we’re talking about, we would carry with us what makes us guys from Oklahoma wherever we went,” Taylor Hanson said. “The fact that we would stay close to what makes us who we are, that is the unique element. It’s not about a place, it’s about deciding what you’re going to do.”

Tulsa has a spirit that defines the city, they said. It’s a spirit of hard work and dedication that inspires them to work more and harder on a variety of projects as much as anything else.

“I think our job as artists is to see the potential,” Zac Hanson said. “There is a part in us that sees what we want Tulsa to be, what represents us and how we want to be part of making it that anthem. That same DNA that makes us want to write songs and create things also makes us want to be a part of the best version of our hometown.”