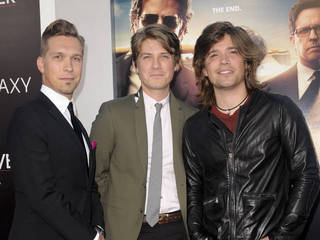 Copyright 2013 World Entertainment News Network. All rights reserved. This material may not be published, broadcast, rewritten, or redistributed.

The MMMBop hitmakers handed out bottles of MmmHops, which the stars helped create with brew masters at a craft brewery in their native Oklahoma, and they found a fan in funnyman Ed Helms.

Singer Taylor Hanson posted a photo of himself and the actor holding bottles of the beer on the group’s Twitter.com account.

MmmHops bottles come with the tagline ‘from the guys that invented MmmBop’.