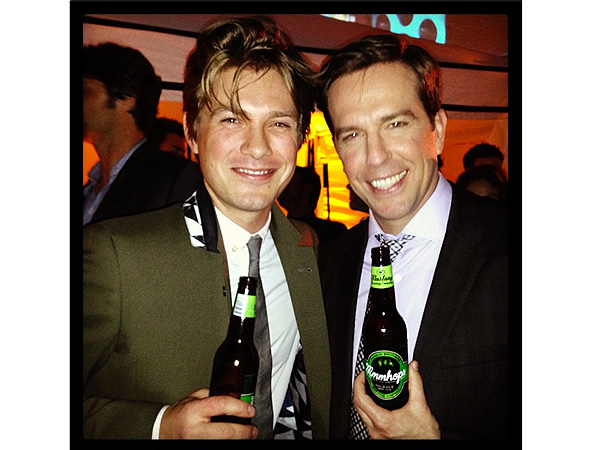 Taylor Hanson and Ed Helms
COURTESY TAYLOR HANSON
As if the sound of Hanson’s mega-hit “MMMBop” wasn’t intoxicating enough, the adorable band of brothers has produced something that could really get you buzzing: a new beer called – what else? – MmmHops.

The awesomely-titled IPA – created with the help of a craft brewery in their home state of Oklahoma, according to BeerPulse.com – was introduced by the brothers at The Hangover Part III afterparty in L.A. Monday night.

Taylor Hanson and Hangover star Ed Helms enjoyed a brew together at the bash – and the middle Hanson brother shared a photo of the moment on Instagram.

Debuting the beer at a party for the film is no accident – the movie even opens with a scene of Zach Galifianakis driving and grooving to “MmmBop,” which is on the movie soundtrack.

In 2011, rumors of a Hanson beer hit the internet, and drummer Zac Hanson confirmed it was true. “A branded HANSON IPA beer concept is in the works under the moniker ‘MmmHops,’ ” he said at the time, adding that the idea, “has been brewing” for a while.

The three brothers – who have nine children between them (perhaps that is why they need a drink?) – amusingly write on the bottle that it’s “from the guys that invented MmmBop.”

So really, how could you go wrong?