Hanson shows up to ‘The Hangover Part III’ premiere 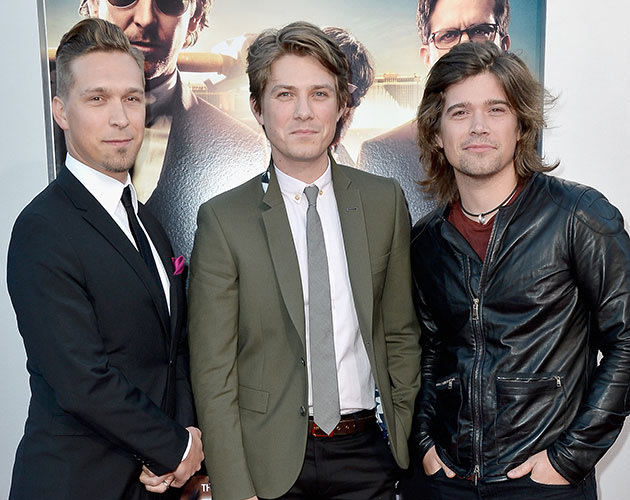 There was more than one wolf pack walking the red carpet at the Los Angeles premiere of “The Hangover Part III.” The band of brothers Hanson joined actors Bradley Cooper, Ed Helms, Zach Galifianakis, and Ken Jeong to celebrate the third chapter in the “Hangover” franchise.

It might seem surprising to see Isaac, 32, Taylor, 30, and Zac, 27, promoting the movie, since they’re still best known for breaking into the music business as long-haired, squeaky-clean teenagers in the 1990s. But it turns out that their signature tune “MMMBop” is the first song on the movie’s soundtrack, and is played right at the top of the film.

“It’s a very funny scene,” Taylor Hanson said, dressed in a green suit jacket and a lock of his signature blonde hair falling across his face. “Whether you’re a Hanson fan or a ‘Hangover’ fan, I think you’re gong to find it funny.”

Isaac, the eldest Hanson bro, looked dapper in a slim black suit, bright pink pocket square, and his hair swooped high on his head. Zac, a.k.a. Little Hanson, was the most casual with a leather jacket, necklace, a five o’clock shadow, and shoulder length hair. Hey, they wouldn’t be recognizable unless at least one of them had hair past his chin, right?

They also seem to be proud that their debut single from 1997 is still getting some play, even if it’s for comedic material. But it’s been fun watching this trio grow up, become husbands and fathers, and continue their music career. In fact, they’re promoting a new album “Anthem,” set for a release next month.

And since Hanson performed their first professional gig in 1992, this year marks the band’s 21st birthday. And how else could they celebrate but to come out with their very own beer, appropriately named MmmHops?

“People will actually be able to get a hangover with Hanson,” Taylor quipped. So, with a new album, a new beer, and a presence in a blockbuster flick, Hanson might be the band of the summer once again.