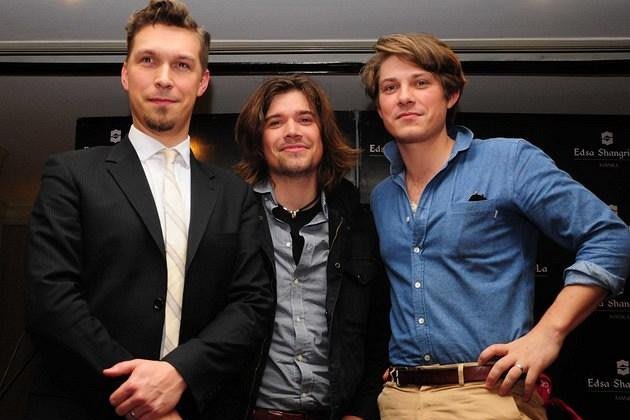 Isaac, Zac, and Taylor Hanson of the band Hanson during the press conference of their “Shout It Out” concert on March 30 at the Smart Araneta Coliseum in Quezon City and March 31 at the Waterfront Hotel inCebu. (George Calvelo/NPPA Images)

The Hanson brothers Isaac, Taylor and Zac have grown into fine men, but some of their hits, such as “MMMBop,” “Where’s the Love,” and “Penny and Me” are still very much alive among Pinoy music lovers.

Now they’re back in the country for the two-day concert  “Shout It Out Tour,” on Friday, March 30 at Smart Araneta Coliseum and on Saturday, March 31, at the Waterfront Hotel in Cebu.

The brothers told the press just what it is that makes their music last.

“We’re nerds about music. We love songwriting or we could probably just easily be songwriters and producers. We like the music side a lot,” Taylor told the press on Thursday, March 29, at the EDSA Shangri-La Hotel.

Many years from now, the band’s lead vocalist and keyboardist shared that they want to be remembered as “Hanson who writes music that lasts.”

“We want to be known for writing songs that last. You know, writing music that stands the test of time, the music that still holds up down the line,” Taylor added.

The Hanson brothers all have their own families now, so they we’re asked if they will allow their kids to form a band, also to be called Hanson.

Zac joked that their kids at least need to be creative enough to think of an original name for their band.